A Journey through My Tarot Decks: The Hanged Man (Trump 12)

In this series of posts, I plan to discuss all of the Tarot cards in order, using a different deck for each card. Today I'm exploring Trump 12 – The Hanged Man – from Tarot of a Moon Garden by Karen Marie Sweikhardt. 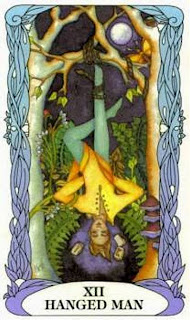 "The garden of myth and magic,
Secret place of heart
Scattered under stars,
Where magic makes its flight
On a moonbeam of delight."
~ from "Moon Garden" by Karen Marie Sweikhardt
In Sweikhardt's Moon Garden deck, The Hanged Man is suspended from Yggdrasil, tree of the Norse god Odin. How do I know? She tells me so in the book that goes with the deck! Yggdrasil is an ash tree, and Sweikhardt notes that ash was commonly used for the traditional sacrifice of the Yule log – "equating the twelfth key of the tarot with the twelfth month." She adds that it is also occasionally linked with Twelfth Night.

On Sweikhardt's card, four runes fall from The Hanged Man's bound hands. They are Isa/Is, meaning suspension (Horik Svensson, in his book The Runes, calls it "time out"); Perth/Peord, meaning initiation (all things hidden, according to Svensson), Odin/Os (blank rune of total potential or the abyss), and a fourth rune that is just emerging and cannot be read.

The Hanged Man forms a fifth rune with his legs – Wunjo/Wyn (reversed due to his position). Sweikhardt likens this to the limbotic stage experienced by a butterfly before it emerges from the chrysalis. Svensson describes Wunjo/Wyn (which he writes as Wynn) as "the ultimate happy rune, symbolizing the old adage 'all's well that ends well.'"

Sweikhardt includes a "Ritual" for each of the cards in the Moon Garden deck. For The Hanged Man, she suggests researching the runic equivalents of the letters in your name and contemplating on the properties of those runes.

In the LWB for this deck, Laura Clarson provides the following divinatory meanings: "Life in suspension. Transition. Change. Reversal of the mind and in one's way of life. Apathy and dullness. Abandonment. Renunciation. The changing of life's forces. The period of respite between significant events. Sacrifice. Repentance. Readjustment. Regeneration. The approach of new life forces." Reversed: "Lack of sacrifice. Unwillingness to make the necessary effort. Failure to give of oneself. Preoccupation with the ego. False prophecy. Useless sacrifice."
on Tuesday, August 03, 2010