A Journey through My Tarot Decks: Justice


In this series of posts, I plan to discuss all of the Tarot cards in order, using a different deck for each card. Today I'm exploring Trump 11 from Tarot of the Spirit (Pamela Eakins, Ph.D., Scribe. Joyce Eakins, M.F.A., Painter). Trump 11, which is called Justice in traditional decks, is called Karma in Tarot of the Spirit. 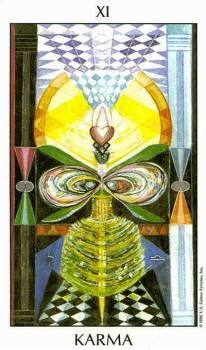 "If you want to know the past,
look at your present.
If you want to know the future,
look at your present."
~ Buddha ~
(quoted by Pamela Eakins)
Like many other decks, Tarot of the Spirit incorporates associations with the Hebrew alphabet, Kabala, Tree of Life, and astrology. In addition, Eakins provides a "Veil" and a "Mystery" for each Major Arcana card. For Key 11, Karma, the Veil is "No matter what we do, we cannot change our fate." The Mystery is "The nature of things is to move into perfect balance by making adjustments to the forces and forms of the universe. All adjustment is good in that it moves us closer to the center of the target of perfection."

Hebrew attribution: Eakins attributes the Hebrew letter Lamed (the ox goad) to Karma (Justice). Karma acts as a goad (driving impulse) toward spiritual growth as we learn to recognize and deal with the consequences of our thoughts, words, and deeds.

Astrological attribution: Libra, which Eakins defines as "mediation and balancing." Libra is a cardinal (initiating, originative) Air sign known for being peaceable, cooperative, socially adept, and able to see both sides of a question. The element Air is considered the element of intellect, logic, and objectivity. In astrology Libra is represented by the scales.

Tree of Life: Eakins assigns Karma as the Twenty-Second Path, mediating between Geburah (destruction) and Tiphareth (spiritual love and beauty manifested on the Earth plane). We sometimes think of all destruction as being negative, but Eakins points out that Geburah, as a destructive principle, is necessary for spiritual enlightenment and can be used to "cut away the false values of past conditioning." We must destroy the old to the same degree that we construct the new in order to achieve balance.

On Key 11, Karma appears "as a spinning insect-like top, balanced on the Middle Pillar on the Tree of Life. The central axis is a sword which remains in constant motion. It is propelled by the lemniscate-like (figure eight-like) wings of karma." (Eakins)

Symbols described by Eakins:
The overriding message of Karma in Eakins' deck is the importance of owning the results of our thoughts, words, and deeds. Even if one doesn't believe in the concept of karma (as defined in Buddhist and Hindu systems of thought), it is impossible to ignore or avoid the laws of cause and effect. We have an opportunity, regardless of our religious beliefs, to examine and adjust our purposes and desires – that which "goads" us in one direction or another – so that we draw closer to that "center of perfection".

About the deck: In the Acknowledgments section of the book that accompanies this deck, Pamela Eakins writes: "The Tarot of the Spirit is meant to pick up where other tarots leave off. It has come to us to aid serious students on the esoteric path of the Western mysteries. Its reason for being is to provide assistance for inner awakening and continued spiritual practice." She further states in Chapter 1 that "The objective of working with tarot . . . is to attain a sublime integration of internal contradictory elements in order to transcend conflict or conditioned response patterns and move into a state of inner peace and a deep awareness of our true identity."
on Tuesday, July 20, 2010