A Journey through My Tarot Decks: The Hermit

In this series of posts, I plan to discuss all of the Tarot cards in order, using a different deck for each card. This week's card is The Hermit (Trump 9) from The Dragon Tarot by Nigel Suckling, illustrated by Roger and Linda Garland. 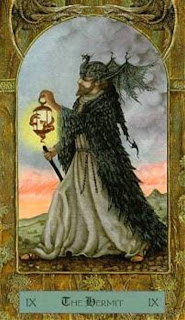 Keywords provided by Suckling:
Wisdom * Solitude * Detachment * Mysticism
In his introduction to this deck, Nigel Suckling writes: "Dragons simply operate by different laws that do not automatically have at their heart human interest. Understanding and bending to their laws is one path to wisdom. This is the spirit in which we adopted dragons as the patrons of our Tarot – because Tarot also operates by laws that lie slightly beyond our conscious grasp, lifting the veil on the hidden undercurrents of the world we inhabit."

The Hermit is always one of the first cards I look at in a deck, and usually turns out to be one of my favorites. The Dragon Tarot by Nigel Suckling is no exception. Of this card, Suckling writes: "The Hermit guards ancient esoteric truths nurtured and harvested away from the bustle of everyday life. He seeks his own path through the dark, little frequented byways of the human soul."

I don't know if Suckling intended to include a reference to Book T's association of The Hermit with the zodiac sign Virgo (ruled by Mercury), but I find it interesting that the man on Suckling's card wears a winged helmet, as does the god Mercury.

Upright meanings include the need for detachment, prudence, patience, caution, withdrawal, and contemplation in addressing a situation or dealing with a particular stage of life. Reversed, The Hermit can suggest the need to avoid being over-cautious, timid, fearful, or hesitant – seeking solitude to avoid interaction with others. In that case, meditation may simply be an excuse for avoiding life.
on Tuesday, July 06, 2010