A Journey through My Tarot Decks: Death


"To my amazement I have heard that there are people
who have never seen a gnome. I can‛t help pitying these people.
I am certain there must be something wrong with their eyesight."
~ Axel Munthe ~
In this series of posts, I plan to discuss all of the Tarot cards in order, using a different deck for each card. Today I'm exploring Trump 13 -- Death -- from Tarot of the Gnomes by Antonio Lupatelli. 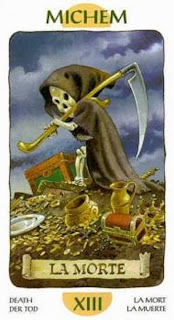 I never thought I'd say this about the Death card, but this one is kind of cute. The central figure looks like a child dressed up for Halloween – or possibly a Jawa from Star Wars.

From the LWB: "the keeper of the Kingdom of Death where souls abandon bodies and everything they possessed: transformation."

As with many Lo Scarabeo decks, the LWB for this one contains just a few words on each card. So far there is no larger book available. Divinatory Meanings are idiosyncratic to this deck. The Major Arcana reflects the story of Sichen, a gnome who "crossed the entire World of the Gnomes." Each Trump is given the name of the gnome represented thereon.

According to the LWB, "these names come from the Hebrew tradition." The name on Death (Trump 13) is "Michem." I did an online search but I had trouble applying the meanings I discovered to this card. I think it is possible that this is a form of "Michael" (MiKH-A-EL; MICHAYAH) a name which means "who is like God." I have heard the phrase "playing God" for someone who seems to think it is his role to decide whether someone will live or die. Certain religions and cultures believe that God decides when and how people will die.

Christian tradition gives to St. Michael four offices (emphasis mine):
Strewn on the ground all around Death we see the trappings of earthly life – the material possessions and money that we cling to so eagerly during our time on earth. A silver plate, gold coins, a crown, treasure chests, pots and urns, jewelry – Death walks over the top of it all without regard for whatever value it might have to mere mortals. As the saying goes, "You can‛t take it with you."

It‛s no wonder that readers and querents alike often suppress a gasp when this card appears. In Tarot of the Gnomes, Death "walks softly and carries a big scythe." The Trump is number 13, which has a long-standing association with misfortune in many cultures. The card can refer to physical death (or the querent‛s concerns about or obsession with death). However, it‛s helpful to remember the keyword transformation. One very pertinent definition for the word is "a marked change, as in appearance or character, usually for the better."

Death prompts me to examine and explore areas where I may need to initiate or experience a transformation. Something needs to be left behind so that I can enter a new phase or stage in my life. The death of difficult times and destructive patterns will help me move toward brighter days.
on Tuesday, August 10, 2010