A Journey through My Tarot Decks: The Star

In this series of posts, I plan to discuss all of the Tarot cards in order, using a different deck for each card. Today I'm exploring Trump 17 -- The Star -- from the Morgan-Greer Tarot (Illustrated by Bill Greer under the direction of Lloyd Morgan. Published by U.S. Games Systems, Inc.) 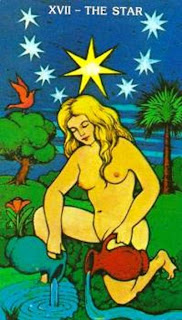 As Lee A. Bursten points out in his review of the deck, the Morgan-Greer Tarot is basically a "Waite-Smith clone," obviously influenced by an earlier deck by U.S. Games Systems, the Aquarian Tarot by David Palladini. U.S. Games Systems describes the Morgan-Greer Tarot as being "based on the continued knowledge, wisdom and interpretation of Paul Foster Case and Arthur Edward Waite."

On the information card that came with this deck, Bill Greer notes: "In the Morgan-Greer deck, the Case book was used as a primer. There are certain colors used as dictated by Case for symbolic reasons. I sought to incorporate these colors. . ."

The booklet "Highlights of Tarot with Coloring Instructions" (Builders of the Adytum*) notes that the color associated with The Star by occultists is violet. The mountains in the background are supposed to be violet, according to Case, and I guess I can go along with that, although they look blue on The Star from my Morgan-Greer deck.

"Highlights of Tarot with Coloring Instructions" goes on to note that the Centra Star should be yellow (check), the grass and tree leaves should be green (check), and the background should be blue (check). We also have brown tree trunks, white stars, and blonde hair, as per Case. The vases are supposed to be orange. On my version of the card, one appears to be blue and the other, red.

Divinatory Meanings (DMs) provided by U.S. Games Systems: "Enlightenment, inspiration, purification, finding one's inner light." Reversed: "Arrogance, defeatism." In comparing this to Waite (The Pictorial Key to the Tarot, WeiserBooks), I see that his meanings for the upright Star card are somewhat discouraging: "Loss, theft, privation, abandonment." However, he concedes that "another reading says – hope and bright prospects." Waite's DMs for the reversed card are "Arrogance, haughtiness, impotence."

* Builders of the Adytum is a religious organization founded by Dr. Paul Foster Case.
on Tuesday, September 07, 2010