A Journey through My Tarot Decks: Judgment

In this series of posts, I plan to discuss all of the Tarot cards in order, using a different deck for each card. Today I'm exploring Trump 20 -- Judgment -- from The Arthurian Tarot by Caitlin and John Matthews (illustrated by Miranda Gray, published by Aquarian Press).

The Arthurian Tarot (also known as the Hallowquest pack) is described by Caitlin and John Matthews as "a series of doorways into time and space" which depicts the characters and themes of Arthurian legend using the format of the Tarot. 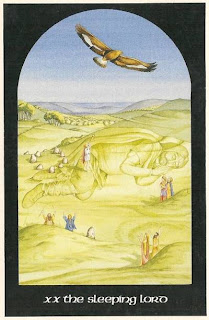 "Here lieth King Arthur that shall raigne again."
~ Lydgate (medieval poet) ~
On Trump 20 we see the gigantic figure of The Sleeping Lord, lying as a hill, incorporated into the land itself. All around him, people rise out of their tombs and look upward to a great eagle flying overhead.j

According to prophesy, King Arthur can only be "awakened" in the time of Britain's greatest need. At that time, it is said, he will reclaim his throne and restore the Round Table.

Caitlin and John Matthews write: "The return of Arthur is a prophesied event which can happen at the changing of the tides of time, at the turning of the aeons. It can happen, has happened and will happen within the circles of eternity. Time is not what we have understood it to be and the ways of regeneration are wonderful and mysterious to us."

Divinatory Meanings provided by Caitlin and John Matthews: "Renewal, resurrection; recapitulation of events or ideas; prophetic vision; ending or beginning; forgiveness; adjustment; recovery of that which has been lost sight of; impulse fo change one's life."