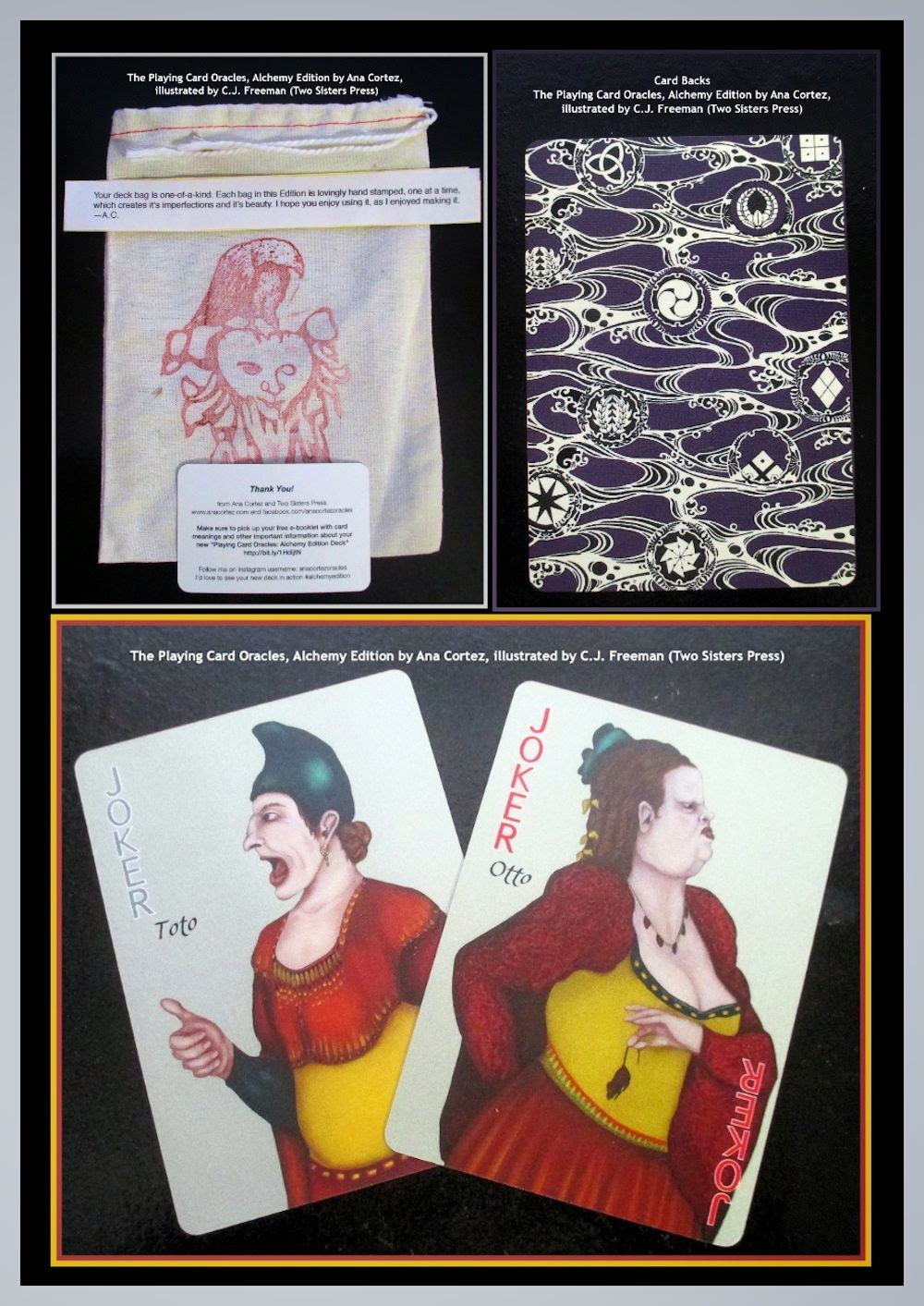 As a fan of the _Playing Card Oracles Divination Deck_ by Ana Cortez and C.J. Freeman (U.S. Games Systems, Inc.), I was delighted and intrigued when I learned Ana was publishing a new deck based on her father’s artwork. 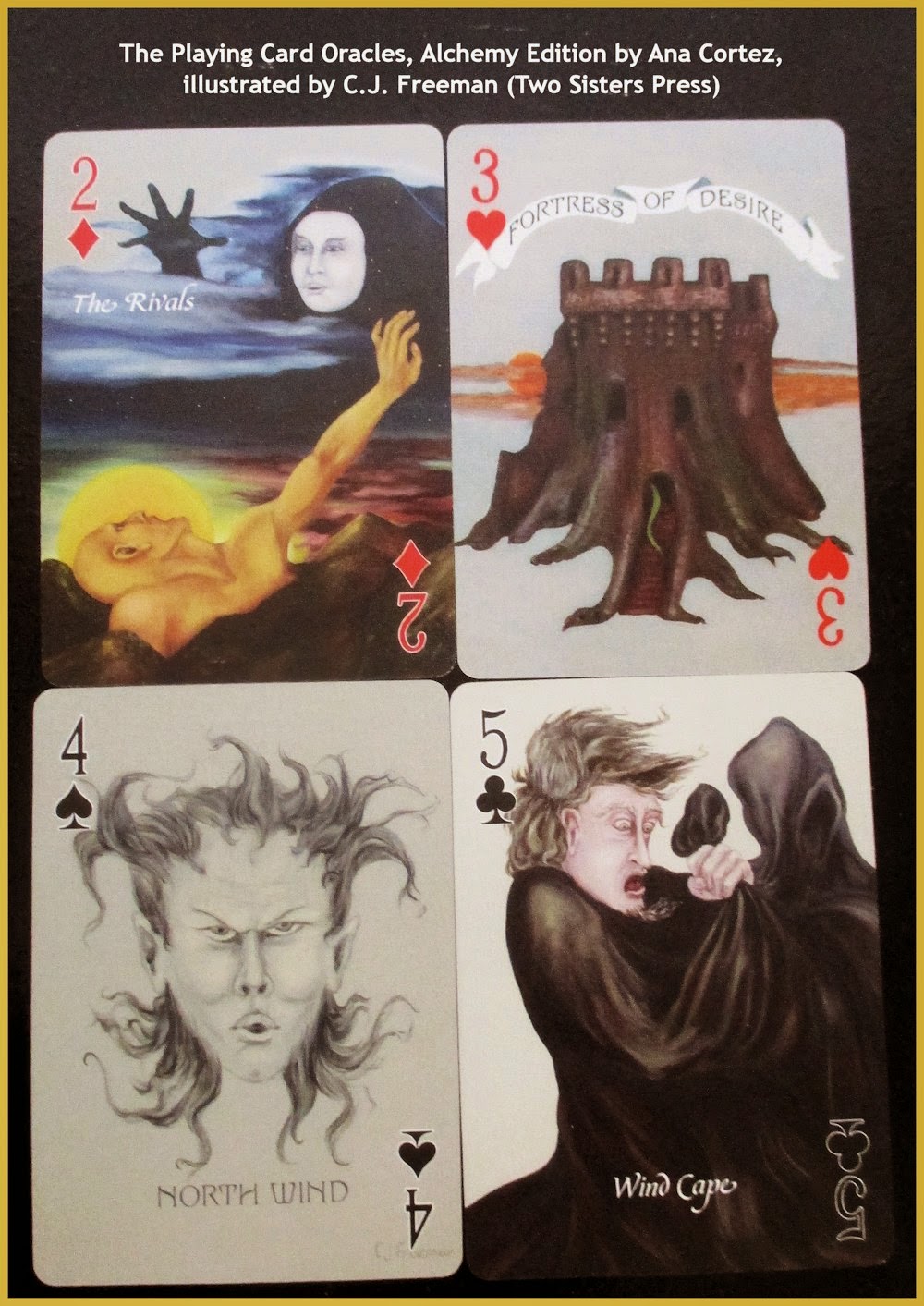 Freeman’s art is dramatic and distinctive, evocative and expressive. My reaction to so many of the images is “Oh my,” followed by a closer study of every element in the image. Many of the images seem to come alive, infused with an intense spirit that cannot be suppressed. My fascination deepens when I explore the relationships between the images and the suits and numbers of a traditional deck of playing cards, then incorporate the title or name applied to each card.

It should be obvious to anyone who looks at this deck of cards that there is profound meaning to be found, and no doubt a few surprises as well. I can't wait to find out what Freeman's friends have in store for me...

“Playing cards offer a profound language for the pursuit of self knowledge and personal
reflection. Yes, playing cards. This is something few are aware of. Used primarily either
for games or parlour style fortune telling, playing cards have been overlooked by more
‘serious’ practitioners of divination for many a century. This is changing. The deck you
now hold in your hands and your own exploration of it are part of a new dawn. A bright
era of self awareness and empowerment approaches as the world awakens to playing
cards in a new light. . . The Playing Card Oracles: Alchemy Edition Deck reveals the power in that little paper dynamo so long hidden in humble black and red. The strength of the illustrations but mimics the strength inherent in the ordinary cards themselves. When used according to
the principles laid out in this PDF and in The Playing Card Oracles, A Source Book for
Divination, their voice comes through loud and strong, like a roar.” 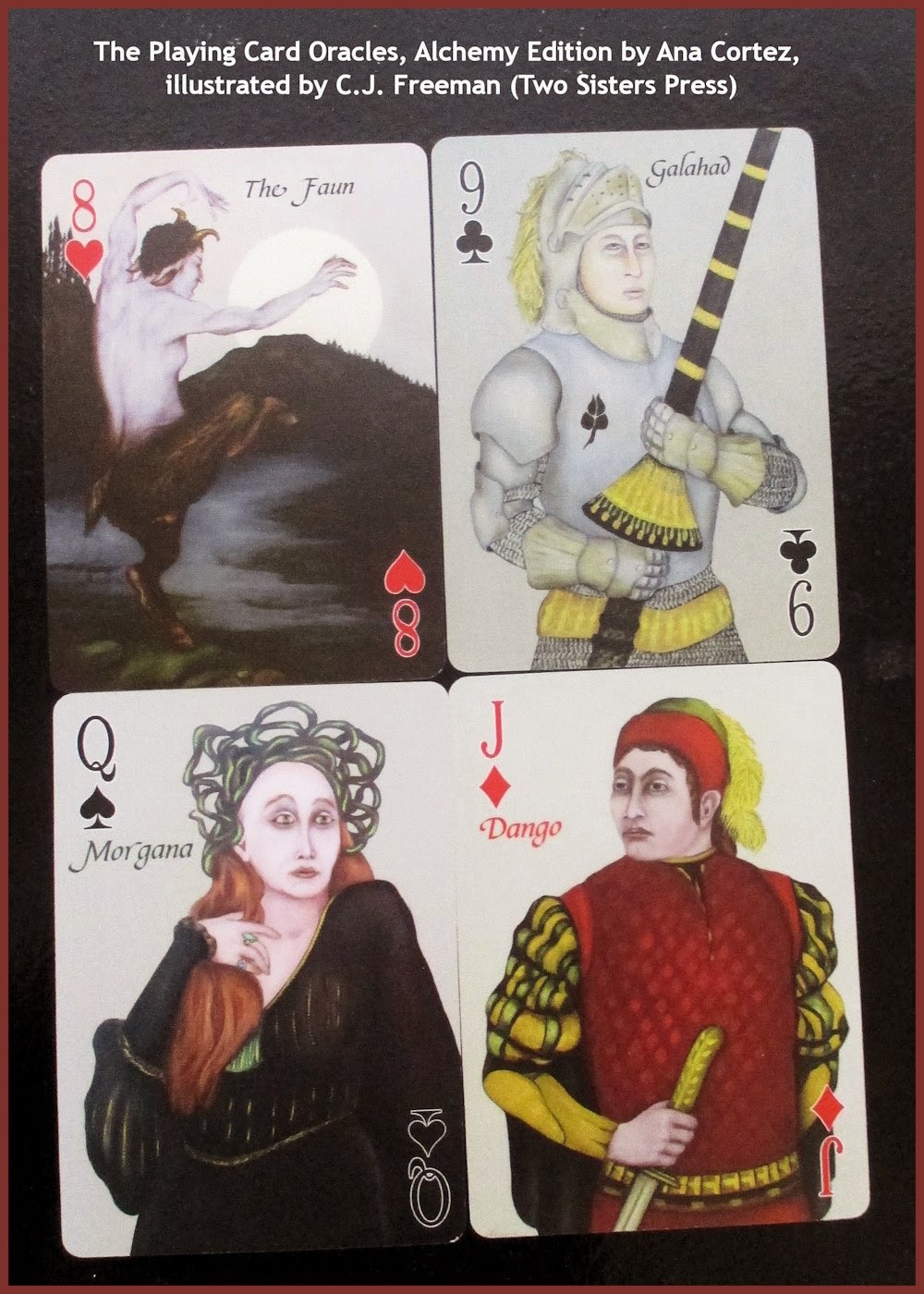 This deck features 54 pieces of oracle art, including 52 cards of traditional playing card suit and number plus 2 jokers, designed for divination. The 52 cards correspond to the 52 weeks of the natural year. The four suits (Diamonds, Hearts, Clubs, and Spades) correspond to the four seasons. The thirteen cards in each suit correspond to the 13 weeks of each season as well as the 13 lunar cycles of the year (each of 4 weeks).

The Court cards symbolize 16 basic archetypes for the human personality. The suits determine which element and which category of personality are expressed. Diamonds represent Fire; Clubs represent Air; Hearts represent Water; and Spades represent Earth. Unlike a deck of regular playing cards, which has three Court cards for each suit, this deck has four: the Lady (numbered 10), Jack, Queen, and King.

Pips number Ace through Nine. Cortez advises us to view these as experiences or “part of a script in a play or movie,” whereas the Court cards are the characters in that play or movie. Interpreting the Pips is based on a combination of numerology and element/suit designation. 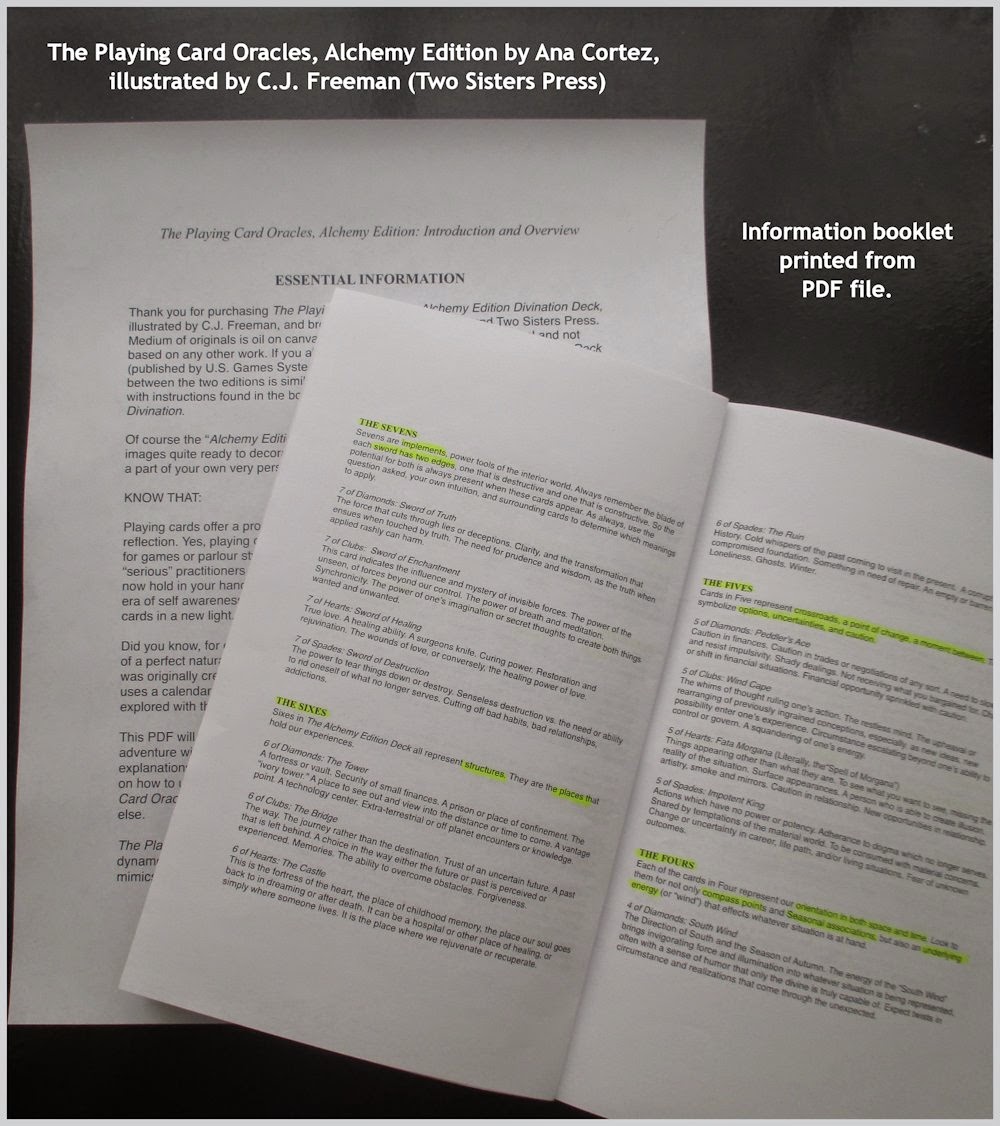 A PDF guide is available for the deck. I printed mine in booklet form and stapled the left side, after which (as you can see) I proceeded to do a lot of highlighting. The guide offers sections titled Essential Information, The Courts, The Pips, Essential Suit Meanings, The Oracles, and sections for each pip number.

Cortez notes that some of the imagery from the U.S. Games “Playing Cards Oracle Deck” resembles imagery in the “Alchemy” edition, while some is quite different.

For example, compare and contrast: 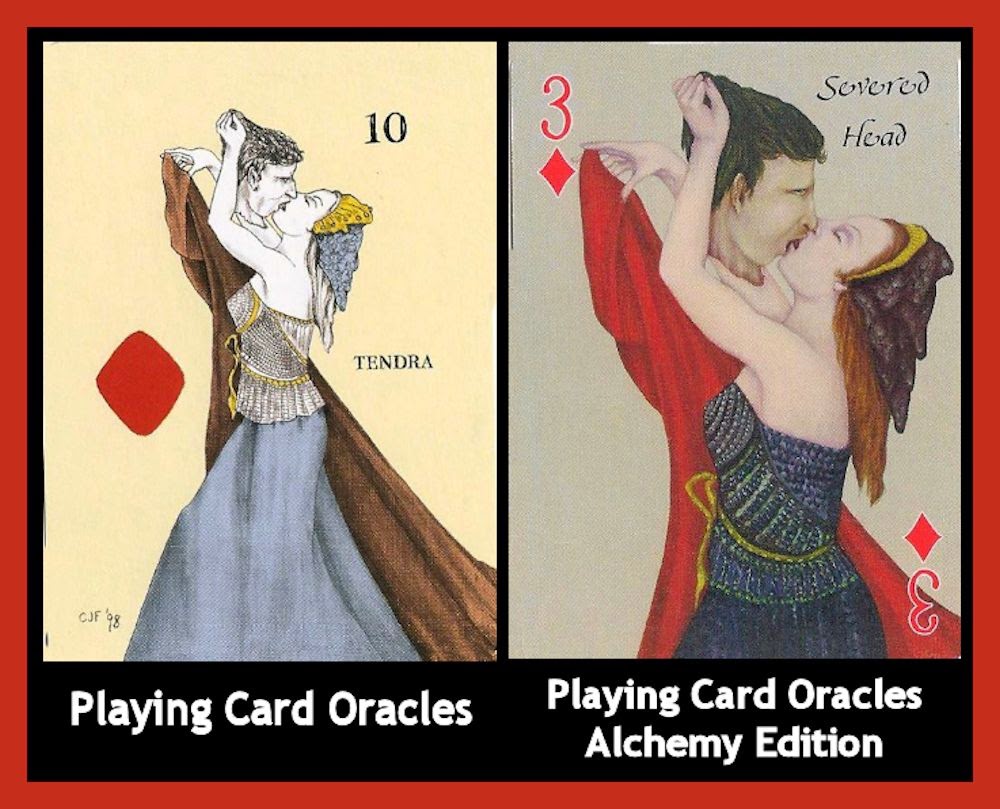 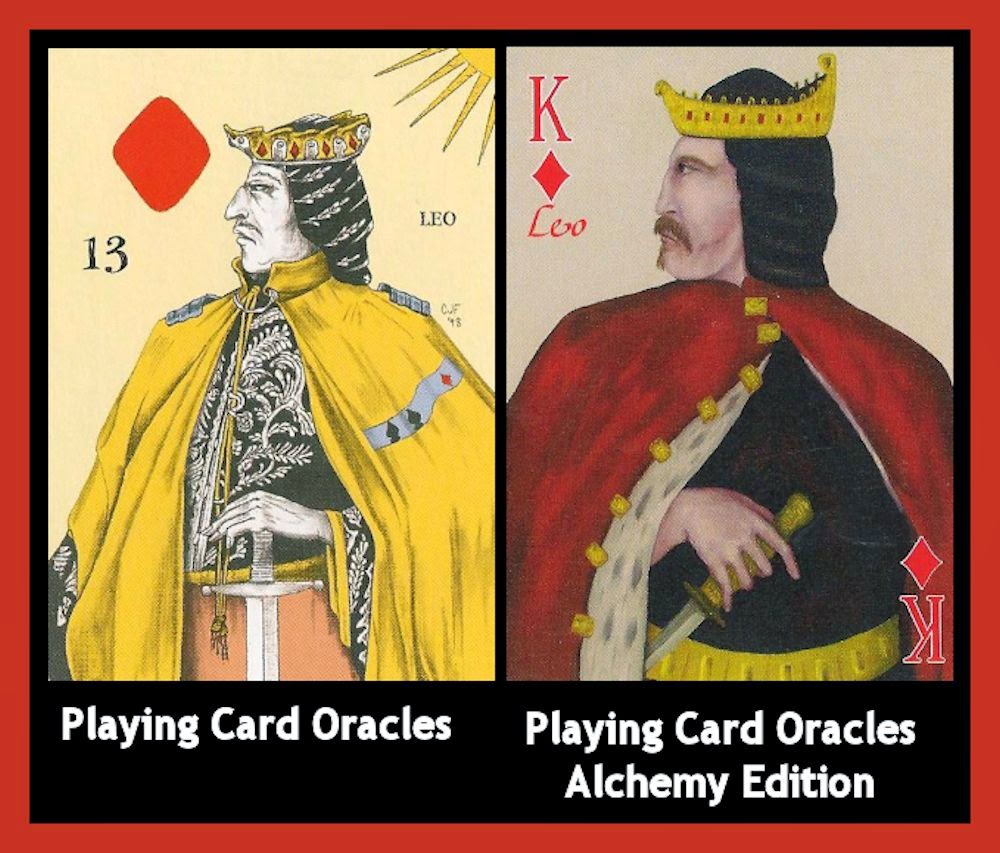 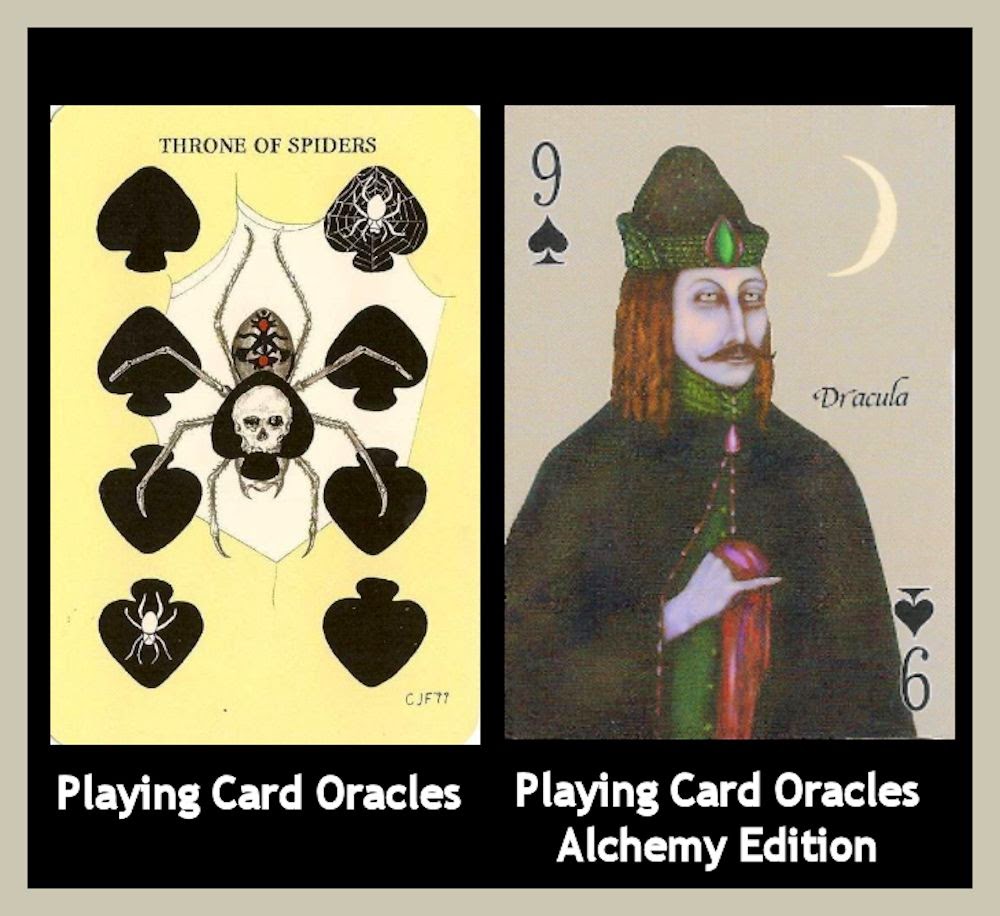 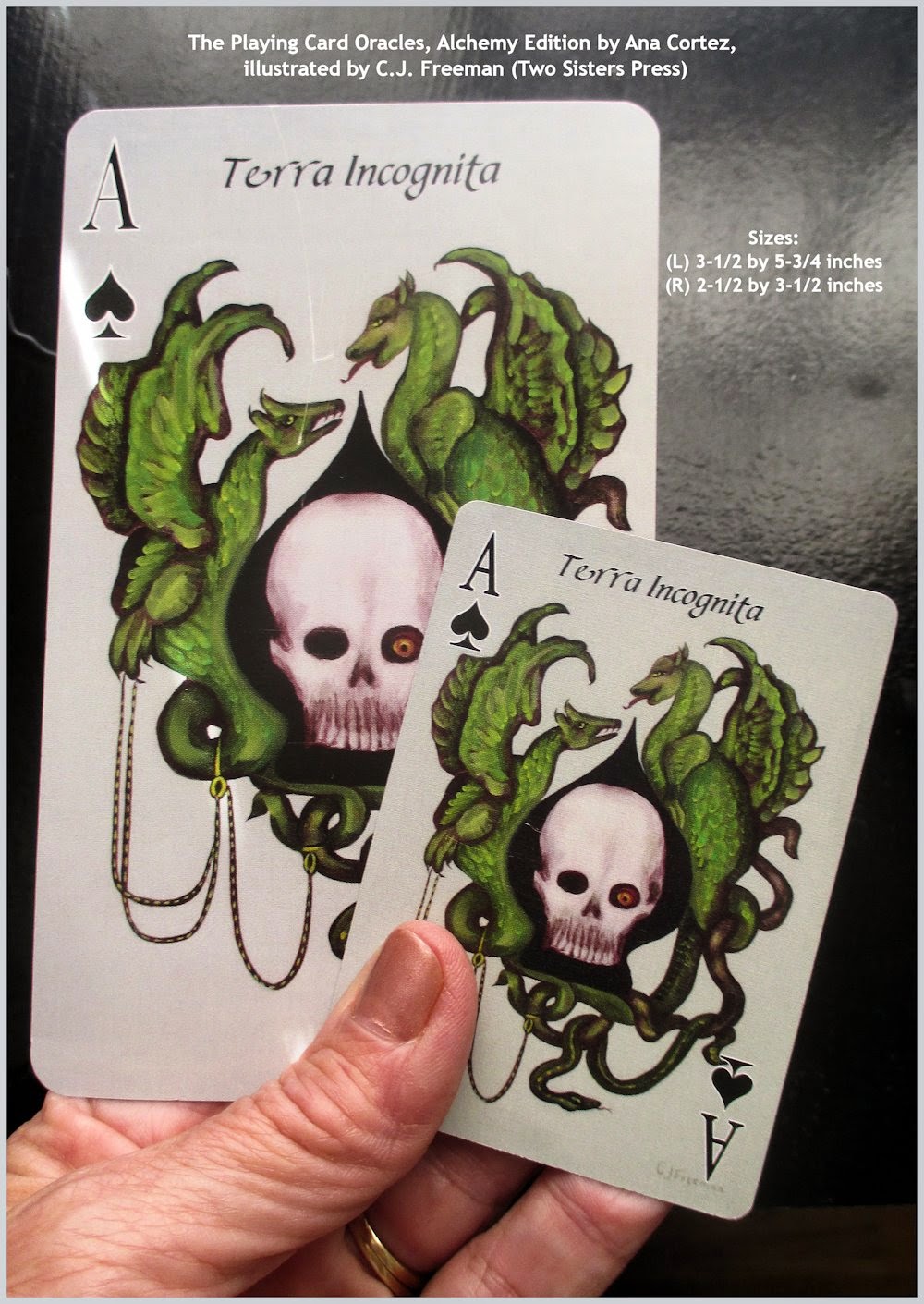 The Alchemy Edition is available in two sizes: 2-1/2 by 3-1/2 inches and 3-1/2 by 5-3/4 inches. Both sizes arrive shrink wrapped and tucked in a natural muslin keepsake bag, with a custom, hand stamped design. 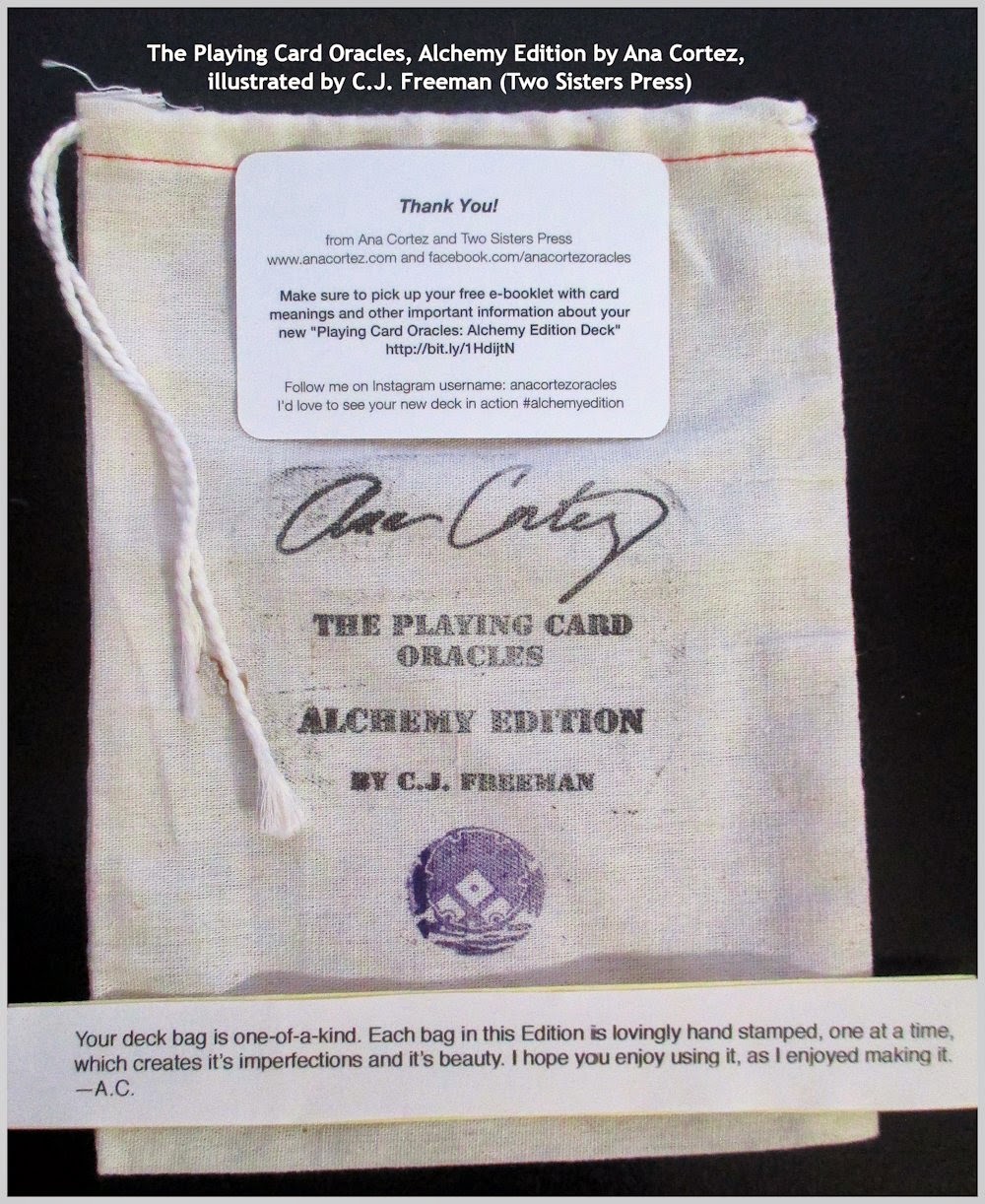 Card backs are what I would call eggplant purple with a cream-colored design that stretches from side to side and incorporates various shapes and symbols. 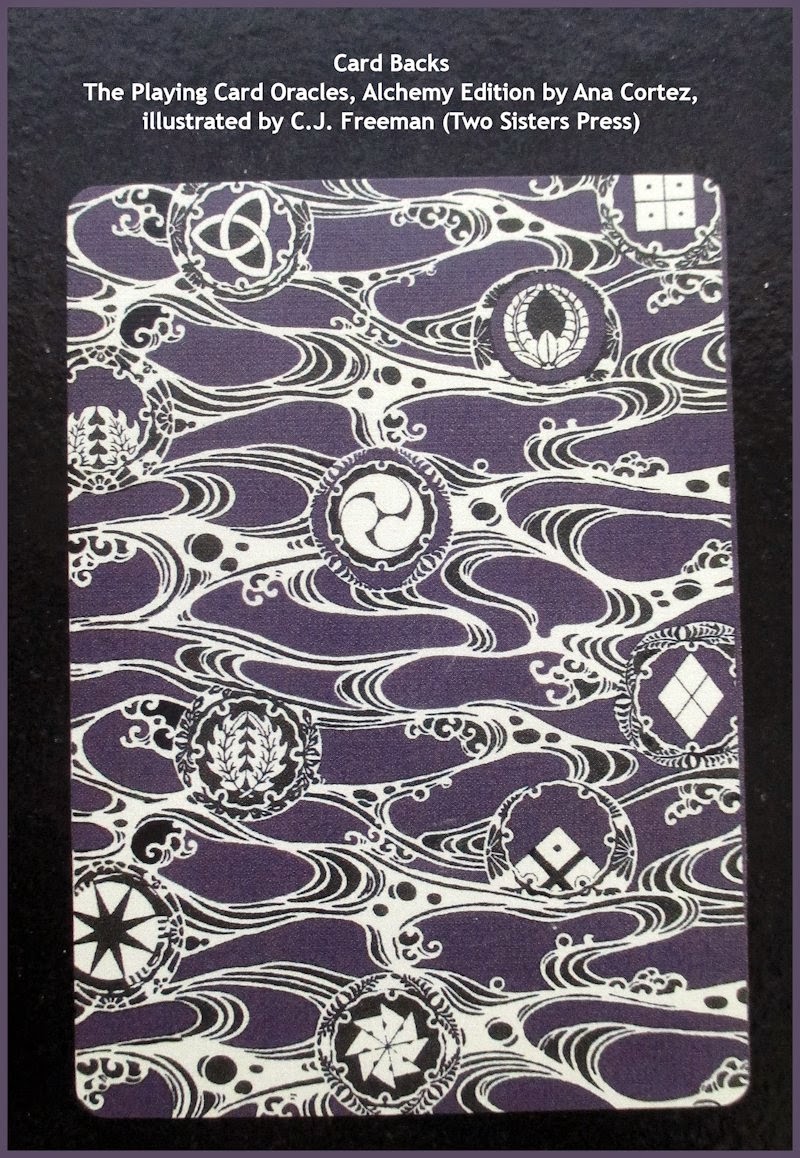 Ana tells me, “As far as symbols on the backs of the cards, I think they are each wonderful for meditation, many being symbolic representations of the number 4, which is so key in the playing deck. I like that they are a little unusual, maybe people will see in an unusual way. Don't know where my dad got these from. They were cut and pasted on top of a vintage Japanese wallpaper design (the swirls) he found in a book. He had so many obscure books...”

The card stock is medium, typical Tarot card weight. The smaller size is, of course, easier to shuffle, but the impact of the images is stronger with the larger format. 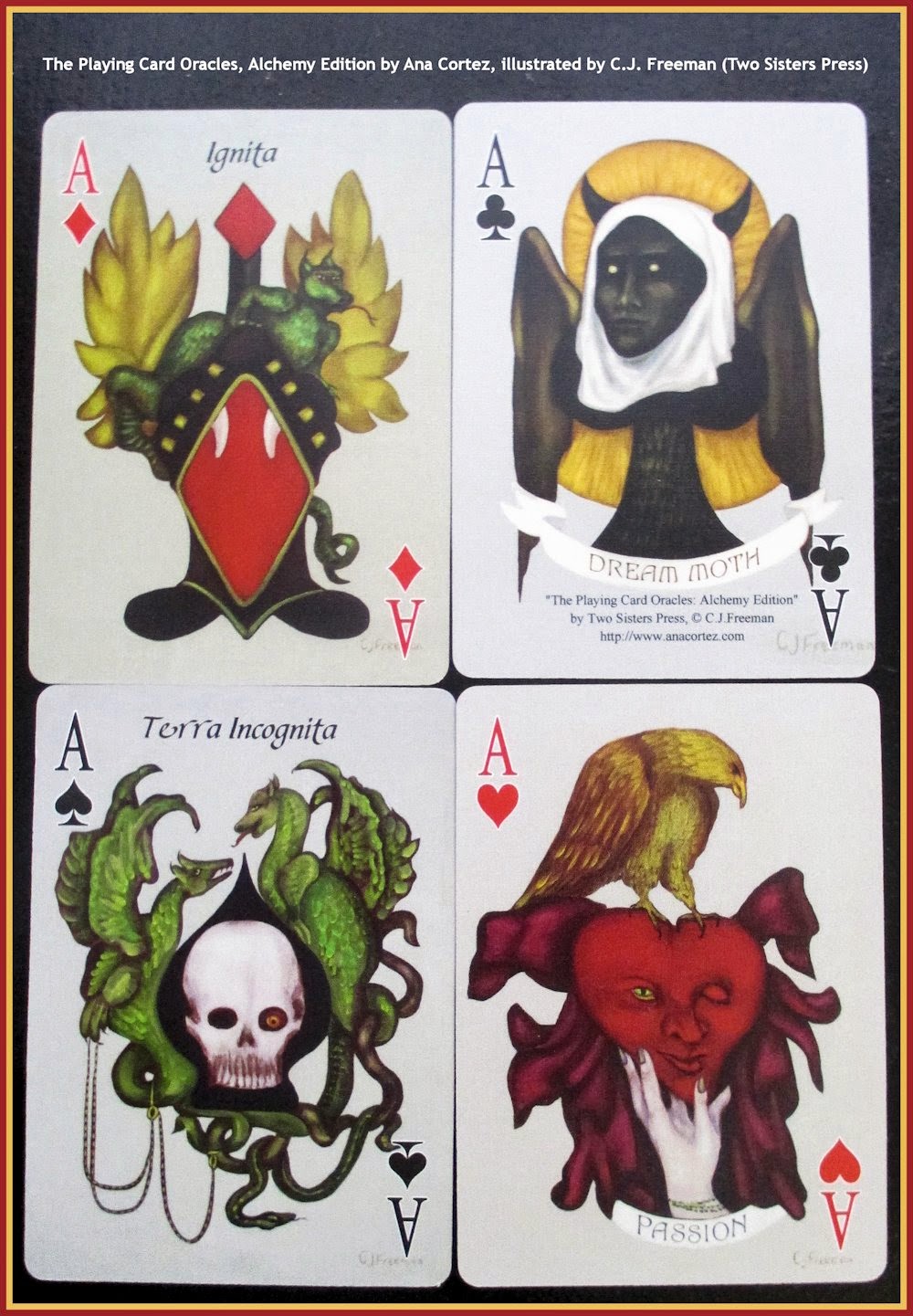 Ana Cortez says: “What you will find in this new deck is 52 cards of traditional suit and number (plus 2 jokers) with very untraditional imagery. My dad used to point out how very generic playing card figures had become over the centuries. He wanted to revitalize them and return them to something exciting and alive.”

My verdict: Success on all fronts!