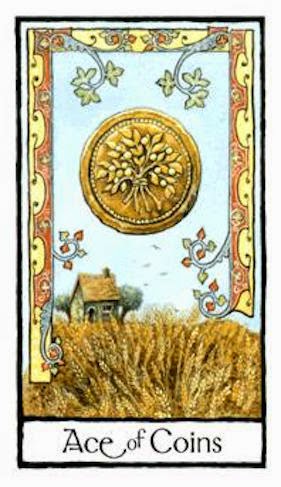 What a nice visual the Old English Ace of Coins makes. Very different again from the Rider Waite traditional card, although the message conveyed in both cards is much the same.

The Rider Waite has a hand that offers a large pentacle, again the hand a symbol of a gift, the gift is the tangible. The Pentacle or Coin, whichever you choose to call it, can very simply mean that the time is right for going ahead with a money making idea, or that prosperity is in the cards! In the Rider Waite card, the garden is shown as lush and green, green being a colour that can represent adaptability, growth, balance, expansion and creativity.

The Old English shows us a house with a tree each side and that stands facing a field of wheat that is ready to harvest. When I look at this image I get the message that it says the time is right now to harvest that crop if you want to make the best of it. What I do see in this image more than I see in the Rider Waite one is that it shows us how the process through the other three suits has brought us to this moment. In other words, how the thoughts (swords) and the emotions that drive us (cups) have resulted in the necessary action (wands) to now manifest that initial idea into something tangible (coins.) If we look at this image we know that the farmer who lives in the house had the idea (swords) to buy wheat seed and a good feeling (cups) about how successful it could be, and so went ahead and planted and tended it (wands) in order to manifest it into a viable crop.

If we know our traditional meanings then we know the Rider Waite card speaks of this, but the Old English doesn’t just speak of this, it clearly shows us the results of those previous three suits and how this has manifested into the material form.

So the message may be the same for both cards: Manifest those ideas into something tangible. Whenever you see an Ace in a reading it always heralds new beginnings unless of course you’re reading its negative form. The one thing to remember, though, whatever the goal is, it is dependent upon your action to set it in motion.

A nice thing to also remember with all Aces is that its corresponding Major Card is the Magician and I like to think of that card as saying “The magic lies in your hands!”