The purpose of drawing a "Week at a Glance" card is to get a sense of the sort of energy, circumstances, or personal qualities I might need to be aware of during the upcoming week. I also use this opportunity to become more familiar with decks I don't work with a lot, so you will often see me quoting the creator of the deck or someone who has a closer relationship with the deck than I do at this time.

For the week of June 23, 2013 I am departing from my single-card draw in order to spend some time with _Shaheen's Tattered Nomad Oracle_. These cards are designed to be read in groups, so I am doing a 3-card line in which the center card represents the "focus" for the week. 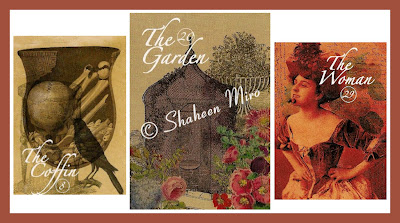 My Focus Card is The Garden (20). I do not have a literal garden -- just not my thing -- so unless the cards are telling me I need to plant one, I'm going to view this card symbolically. Shaheen writes that this card represents "Gatherings, celebration, meetings, social events, public property, creation."

Let's see what connections I can make between this central card and the other two: The Coffin ("respite, ending, burial, death, life change, illness") and The Woman ("A woman or feminine energy").

What I get from Coffin + Garden is a funeral or some other social occasion where something is "laid to rest" or ended. Although this sounds depressing, that type of occasion is often beneficial to those involved in terms of feeling the support and solidarity of a network of people who are also affected by the ending or "death."

My understanding is that The Coffin can also refer to negative thinking or a person who is what we might call a "Debbie Downer." The appearance of The Woman with The Coffin here suggests a female who expresses negative attitudes and thoughts. At least I sure hope it isn't about a woman physically dying...

As far as I know, the coming week will involve one public occasion -- a dinner that I will attend with my sister and my husband. Other than that, I will be occupied helping my mother begin her move from her house into an apartment in a retirement community. I don't anticipate a large public "gathering" related to this, but you could say that quite a few people are "gathering together" to help Mom with this major life change.

The "negative thinking woman" could refer to my mother or to me, at any given time. She does tend to view things negatively or perhaps "critically" is a better word. And when she does, I become negative and unhappy that she is unhappy. Ah the mother-daughter dynamic -- nothing like it!

So I'm going to see these cards as representing the gathering/cooperation of a group of individuals whose intention is to ease my mother's major life change. I can't control anyone else, but I can do my best not to be negative -- publicly or privately! Ms. Merry Sunshine, that will be me!