Like most people, I have a variety of relatively small problems that plague me from week to week. I am going to use the Baroque Bohemian Cats’ Tarot by Karen Mahony and Alex Ukolov (Magic Realist Press) to explore one problem in particular.

I am using a Problem Solving Spread presented by Jeanne Mayell in a _blog post_ from April 4, 2015. Jeanne Mayell does not provide a layout for this spread, so I decided to place the cards in this manner: 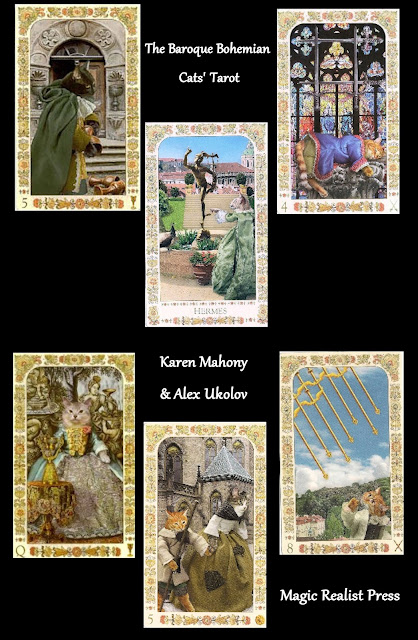 (1) Nature of the problem: FIVE OF CUPS

The suit of Cups tells me that the nature of this problem is rooted in my own feelings, emotions, and subconscious attitudes. With the Five, we are looking at a sense of loss or a perspective that sees the glass as “half empty.” As Karen Mahony puts it, “unnecessary pessimism… looking on the down side.” In other words, this problem is a problem because I feel it’s a problem.

(2) What led up to the current problem: FOUR OF SWORDS

Retreat and reflection, a “time out” of sorts, seems to have led up to this problem. I stopped “doing” and focused on thinking, analyzing, and critiquing (suit of Swords). This has caused me to focus on the perceived problem.

This card is a “rogue card” that doesn’t fit into the traditional Tarot structure. Karen Mahony tells us that  “Hermes put himself into the deck last-minute and totally unexpectedly. That's why there is nothing about him in the book - when I wrote the book (and indeed when it was printed) I had no idea that this trickster god was about to barge his way in.”

So what can we say about Hermes that might explain how a current attitude or actions preserve the status quo (the problem)? Hermes is primarily seen as Messenger of the gods, a Roman equivalent of Mercury. Now, Mercury is associated in traditional Tarot decks with The Magician. Like The Magician, Hermes can be seen as a cunning, clever, trickster character. He served as a psychopomp, or an escort for the dead to help them find their way to the afterlife (the Underworld in the Greek myths). Hermes is the patron of commerce, thieves, travelers, sports, athletes, and border crossings.

It’s really the “trickster” quality of Hermes that stands out to me in this reading. He is a messenger, of course, but do I really understand where (or whom) his messages come from? Is he delivering false information that feeds my misperceptions? As long as I continue to buy what he is selling, I will feel that there is a problem.

(4) Secondary gains from staying in the situation: QUEEN OF CUPS

If I decide to remain in this situation (as opposed to walking away), secondary gains can be found in the Queen of Cups, a double-Water lady with what Mahony describes as “sensibility matched with common sense, a productive creativity. . . ability to combine artistry with real-world success, a love of beauty and the arts.” This resonates with me quite perfectly. Creative but grounded, emotionally open yet never neurotic or out of control. This is what I can evolve into if I stay in the situation while also heeding the messages of the other cards. Her energy is certainly the type I need to embrace and develop if I am to solve this problem while remaining in the situation.

One major change that needs to take place is a shift from discouragement and disappointment (Five of Cups) to activity and a “full speed ahead” approach. I need to become excited, optimistic, enthusiastic – and proceed accordingly towards my goal(s).

I must say, this is not the sort of Outcome I wanted to see in this reading. The Five of Pentacles tends to suggest poverty and deprivation, perhaps at a physical or material level. The feeling harkens back to the Five of Cups in the sense of being exhausted, disappointed, and anxious about that “half empty” glass. Perhaps the cards are saying that this is where I’m headed if I do NOT heed the messages of the preceding cards. The Five of Pentacles can also allude to help that is available, that I am not aware of.  I have to have the confidence and determination to look for it before it can be given. Family members and friends can be supportive, or there may be an “institution” that can be of assistance.

All of this makes sense to me. I think the most difficult thing is to be “excited, optimistic, and enthusiastic” when I just don’t see a reason for it. I am hoping the Eight of Wands is, in fact, telling me that there IS a reason to have that positive outlook and attitude!