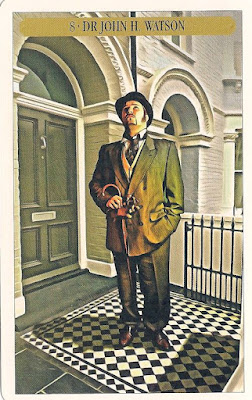 In The Sherlock Holmes Tarot by John Matthews and Wil Kinghan (Sterling Ethos), the Strength card is portrayed by Dr. Watson, originally portrayed in films as something of a bumbler, kind of a “straight man” to Sherlock Holmes. Upon closer scrutiny, however, it becomes clear that Watson is a highly intelligent man and able-bodied assistant to the great detective.

The Holmesian Wisdom for Strength is: “If I have one quality upon earth it is common sense.” This quote is from Watson’s diary, as recorded in The Hound of the Baskervilles.

The book that accompanies this deck also provides interpretations for each card under the headings “The Game” and “The Fog.” The former elaborates on the upright keys, while the latter expands on reversed meanings. An example from “The Game” for Strength: “the strength to keep going when the problem appears to have no solution. . . You are resourceful, but may need to tame the desire to meet opposition in a combative way. Strength held in check remains a reserve which you can tap into.” Examples from “The Fog”: “Weakness, an inability to grasp the problem or to find the energy necessary to combat the situation. An inability to master your fears. . . Feeding your fears gives them strength over you; acknowledging your limitations helps you survive.”

More recently, films have depicted Dr. Watson in very different ways. For example, in the television show “Elementary,” Dr. Watson is JOAN Watson, played by actress Lucy Liu. In the TV series “Sherlock,” Benedict Cumberbatch’s Holmes is accompanied by Martin Freeman as the good doctor. Jude Law plays Dr. Watson in the movie starring Robert Downey, Jr., as Holmes. I confess that although these Dr. Watsons are quite acceptable to me, I’ll always have a soft spot in my heart for Nigel Bruce, who teamed up with Basil Rathbone in the 1940s for my favorite version of Sherlock Holmes.
on Sunday, January 17, 2016