The Flight of the Dragon with Tarot Draconis


As a follow-up to _my recent reading_ with Davide Corsi’s Tarot Draconis (Lo Scarabeo), I am using a spread called "The Flight of the Dragon" provided in the Little White Book (LWB) that comes with this deck.

A layout was not provided in the LWB, so I designed this one using _“Dragon, 1989”_, an image created by Joe Crawford. 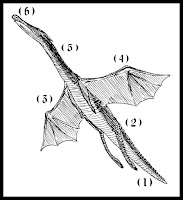 1. The Dragon’s Den. Your starting point. The energies available to you.
2. The enemies. The obstacles – external or inner – you will find along the way.
3. The Fire of the Dragon. The inner resources you are often not aware of.
4. The updrafts. The intuition that can help you to soar to new heights.
5. The allies. External support that your despondency prevented you from seeing.
6. The arrival. Perhaps it is not where you thought you would arrive, but this is what you need to attain a new level of awareness.


The Flight of the Dragon 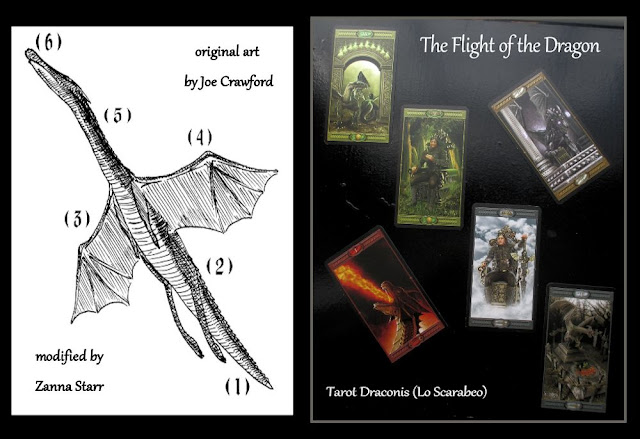 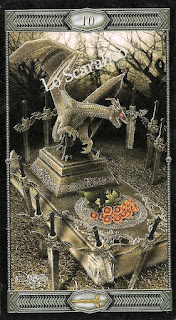 My starting point and energies available to me come from The Dragons of Twilight – “the Shadows. . . that realm in between, inhabited by ghosts and restless souls.” The suit signifies knowledge, clarity, and intelligence. The Ten of Swords is “The crypt of Memory. Conclusion of a cycle.” Its message is: “Detachment is sometimes liberating.” I begin my flight at the end of a stage or phase of my life – perhaps a mental stance or state of mind that needs to be released and left behind. I cannot start this flight until I commit to a new stage or phase. 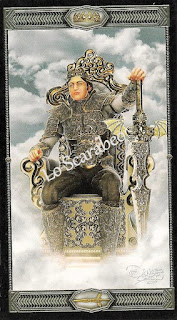 My enemies come also from The Dragons of Twilight, in the form of The Winged King. Although he is often responsible for innovations or invention, he also tends to display a lack of empathy. A detachment that goes too far. So while my starting point/energies tell me that detachment can be liberating, this King warns me that extreme detachment is my enemy. I must find a balance between intellect and emotion. 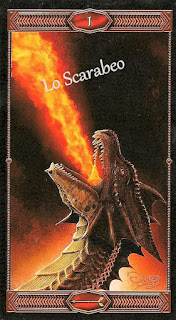 Perfect from an elemental standpoint, The Fire of the Dragon (the inner resources I am often not aware of) appears as the Ace of Wands, from The Dragons of the Battle. The suit is Fire; the Ace represents initiative and courage, a new beginning fired by enthusiasm, optimism, assertiveness, and creativity. 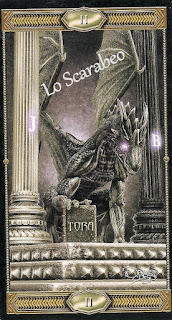 It is hard to imagine a more appropriate card to represent the intuition that can help me to soar to new heights. Linked in astrology with the Moon (emotions, intuition, and the subconscious), The High Priestess brings the exceptional power of the Major Arcana to uphold me in flight. Preparation for my flight includes gathering energies and studying the ancient language. This dragon tells me: “Delve into yourself and abandon your thoughts to the intuition of your superior self.” Indeed, I can be the wind beneath my own wings. 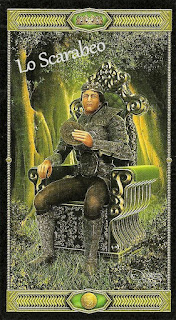 External support that my despondency prevented me from seeing comes from The Dragons of Wealth in the form of the King of Pentacles, master of reliability and pragmatism, The King of the Harvest. My allies consist of that which I have sown and now reap. Inner richness rather than material goods or money are represented here. They come from within. 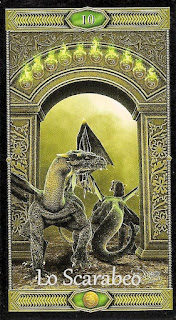 It seems appropriate that my allies (King of Pentacles) would guide me to The Gate to the Kingdom (10 of Pentacles), a solid foundation and sense of well-being. My spiritual “feet” will be planted firmly on solid ground. I will be secure and stable enough to realize that even as I arrive at one destination, I must prepare to depart on another flight, moving upward, forward, inward as I travel to another turning point represented by the number Ten.

What a marvelous set of cards! Look at how the reading begins with the Ten and King of Swords (positions 1 and 2) and ends with the King and Ten of Pentacles (positions 5 and 6). In the middle I have Fire (Ace of Wands) and Water (High Priestess). The balance shown here is amazing and, I believe, significant.

Notice how the Fire of the Ace of Wands bursts out of the calmer, cooler grays and greens of the other cards. Such a brilliant blend of the steadiness of Earth, the detached cool-headedness of Air, the deep-diving introspection of Water, and the blazing spark of Fire.

I think I am going to enjoy this flight! Fastening my seatbelt…
on Wednesday, January 13, 2016