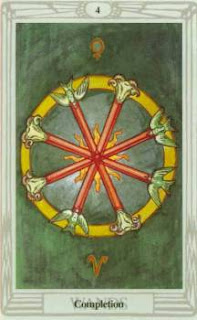 Thoth Tarot by Aleister Crowley
For Crowley (and the OGD), the Four of Wands represents the energy of the planet Venus in the zodiac sign Aries. Crowley titles the card "Completion." He writes that Venus in Aries "indicates that one cannot establish one's work without tact and gentleness." Hajo Banzhaf and Brigitte Theler (in Keywords for the Crowley Tarot) use keywords to describe the energy of the card: "Charm and accommodation (Venus) in connection with a fighting spirit and desire to conquer (Aries)." 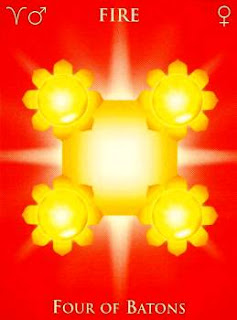 One World Tarot by Crystal Love
Crystal Love associates the Four of Batons with the third subdivision of the sign Aries, with Mars as the natural ruler and Venus as the subruler. She writes: "The boldness, independence and assertiveness of Aries in the third subdivision is muted by the gentle and thoughtful influence of Venus as a subruler. . . The energy is still determined."

A.E. Thierens, PhD. (Astrology & the Tarot)
Thierens describes the Four of Wands as having the energy of "Air on the Fourth house." This makes sense in that the Four is the Fourth card in the suit of Wands. In astrology, the Fourth house is associated with the zodiac sign Cancer, ruled by the Moon. Based on this association, Thierens writes: "generally we find the idea of that which binds together by memory and common motives, thoughts, mottos common to a certain group of people, be it family or nation, clan or army." (Note: The system devised by Thierens is radically different from that of the OGD. I will not go into detail here, but will simply provide the astrological associations for the card under discussion. If you are interested in learning more about this system, I recommend the book referenced above.) 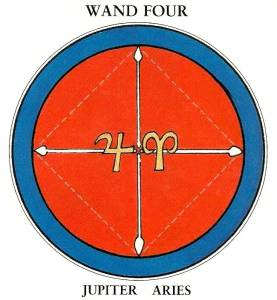 The Mandala Astrological Tarot by A.T. Mann
Like the OGD, Mann's deck associates the suit of Wands with the element Fire. Mann describes Wand Two, Three, and Four as "The Lightning of Aries." Wand Four is assigned to the Third Decan of Aries -- Jupiter in Aries. On the King Scale of Color, the color linked with Jupiter is blue; the color linked with Aries is red. Mann's keywords for Jupiter are "idealism, vision, expansion, mania, success, popularity, religion." For the sign Aries, his keywords are "germinating times; unfolding energy; self-assertion; initiatory energy; adventure; daring; impatience; enterprising." 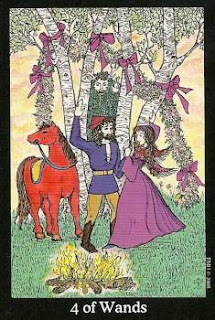 The Whispering Tarot by Liz Hazel
Liz Hazel's suit of Wands is the suit of the Fire element, embodying "ambition, vigor, creativity, travel, high spirits, and energy." She associates the Four of Wands with Venus/Aries. Included in her keywords are: happy celebration, reaching a solid agreement with another, surrounded by the support of family and friends in a venture, invitations to weddings, showers, birthday parties." Keywords associated with an ill-dignified Four of Wands include: "troubles in a marriage or business partnership, lack of protection from outside influences, difficulties with arranging an event. . . scheduling conflicts."

Mann's choice of Jupiter (rather than Venus) in Aries is interesting. Astrologers refer to Jupiter as "the greater benefic" and to Venus as "the lesser benefic." Both planets are considered beneficial and generally helpful in nature. As always, Thierens seems to come out of left field with his Fourth House/Cancer/Moon attribution for the card. However, Liz Hazel's keywords resemble those put forth by Thierens -- even though Hazel uses the Venus/Aries attribution.