Journey Through My Decks: Page of Wands

I believe I am finished playing “catch up” to incorporate the cards I missed the first time around in my Journey Through My Decks series. Last (not least!) we have the PAGE OF WANDS.

For the Page of Wands, I thought it might be fun to compare the card as portrayed in the Art of Life Tarot by Charlene Livingstone (U.S. Games Systems, Inc.) and Tarot of the Masters by James Ricklef: https://jamesricklef.wordpress.com/products/tarot-of-masters/ 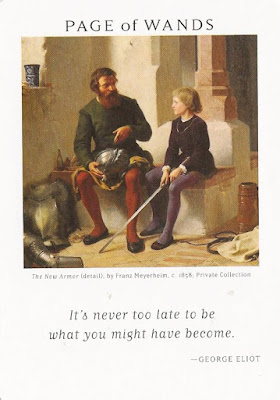 Charlene Livingstone assigns the qualities of enterprise, development, and creativity to the suit of Wands in general. She labels all Pages as “beginner, learner.” Her keywords for the Page of Wands are “enthusiasm, ambition.” To represent these characteristics, Livingstone chose a detail from a painting called The New Armor by Franz Meyerheim (1838-1880). In this image, we see a knight showing a young boy (a page, presumably) the helmet from a new suit of armor. The traditional view of the Tarot Page as representing a young person or student comes through clearly. I like the knight’s reddish leggings as a reference to the element Fire.

To accompany this painting, Livingstone provides a quote from George Eliot, one of the leading female English novelists of the 19th century: “It’s never too late to be what you might have become.” No matter how old we are, we can still access the enthusiasm, desire for learning, and wonder exhibited by the Page of Wands. 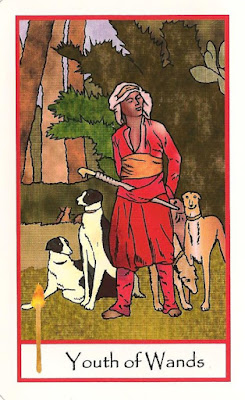 James Ricklef’s choice for the Page of Wands (which he calls the Youth of Wands) is a painting titled The Negro Master of the Hounds by Jean-Léon Gérôme (1824-1904). Several aspects of this image remind us of the Page of Wands, including the “wand” tucked into the young man’s belt and his bright red and orange garments. Ricklef writes that for him, the deciding factor was the presence of several dogs in the painting. He notes, “Dogs are friendly, trusting, eager, boisterous, unruly, enthusiastic, and mischievous – typical traits that arise when we join together the energy of the suit of Wands with the innocence and immaturity of the Youths.” Ricklef's _"pithy meaning"_ for the Page of Wands is "Oh, grow up."

In her book The Tarot Court Cards: Archetypal Patterns of Relationship in the Minor Arcana (Destiny Books), Kate Warwick-Smith writes that in a Supporter role, the Page of Wands represents "Child." As a Resource, it represents "Play." In its Detractor form, it suggests a "Puer" (defined by Warwick-Smith as "someone who. . . refuses to grow up and accept responsibilities"). As a Challenge, this card represents "Immaturity."

In general, I get the sense that the Page of Wands can indicate a valuable "childlike" quality or a destructive "childish" quality. Pages as a group are typically linked with the element Earth. As a Fire sign Sagittarius with a strong Earth influence in my birth chart, I can readily identify with many of the traits expressed by this Page.
on Friday, August 07, 2015