Journey Through My Decks: Knight of Wands

I’m almost finished incorporating the cards I missed in the Journey Through My Decks series. One of these was the KNIGHT OF WANDS. In the Joie de Vivre Tarot by Paulina Cassidy (U.S. Games Systems, Inc.), this knight is a rather astonishing character! 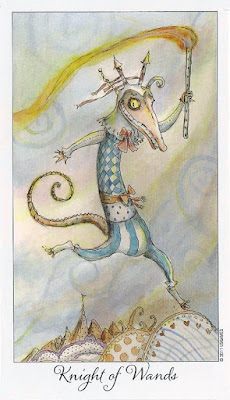 Paulina Cassidy describes him as “sprinting through the countryside with a flurry of energy.” Appropriately named Blaze, he “is always in a state of motion and change. His fearless drive and ideas will lead him to success.”

The image makes me think of the people who carry the Olympic torch from Greece to the host city for the Olympic Games. His broad (and a bit peculiar) grin tells us that he is enjoying himself immensely, with a spring in his step (to say the least). 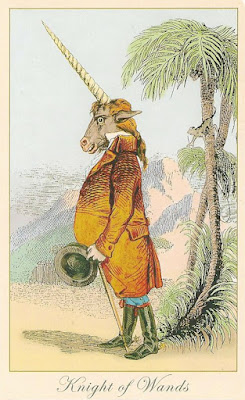 Since we’re talking about quirky cards, why not trot out the Knight of Wands from The Fantastic Menagerie Tarot by Karen Mahony and Alex Ukolov (Magic Realist Press). Seriously, I love this guy, described thusly by Sophie Nusslé in the guidebook that accompanies this deck: “wild and passionate. . . rushes in where more cautious men fear to go. . . idealist who lives by inspiration. . .dashing and adventurous young person. . . ardent love. . . artist breaking new ground.” Sophie also addresses the reversed meanings of this card, which include: “braggart, bully. . . rebel without a cause. . .fiery temperament and fierce enthusiasms that give way to depression or detachment.”

In case you can’t tell, this Knight is a unicorn. Sophie’s “Portrait of the Knight of Wands” is the story of “Achille Baton” who “decided the day he arrived in Paris from his Lorraine province that he would be somebody or die in the attempt, preferably in a duel or of tuberculosis.” As the story goes, Achille is wounded in a duel. He later writes a series of poems which become famous: “The Unicorn at a Gallop.” “At a gallop” is probably the most apt expression we could use to describe the forward motion of the Knight of Wands!

In Mary K. Greer’s system for matching the Court Cards with Myers-Briggs Personality Types, she describes the Knight of Wands as ENFP (Extroverted, Intuitive, Feeling, Perceiving). Greer describes this knight as “an enthusiastic planner of change who sees life as an exciting drama. Authentic and spontaneous. Hypersensitive and hyperalert. Creative but without much follow-through. Fiercely independent. Fascinated most by what might be. Impatient. Strong sense of the motivations of others.” You can find a complete chart of these correlations _HERE_.