Sherlock Holmes Card of the Day: 10 of Observation

The Sherlock Holmes Card of the Day is:
TEN OF OBSERVATION
10 of Swords 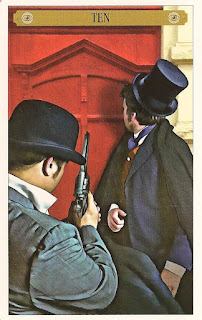 The Ten of Observation is taken from Arthur Conan Doyle’s book The Adventure of the Empty House, in which Sherlock Holmes “returns from the dead” after three years, astonishing now-widower Dr. John Watson. On this card, Holmes and Watson are about to break into the building where Colonel Sebastian Moran – Moriarty’s second in command – lies in wait. This encounter nearly costs Dr. Watson his life, and the villain escapes after being captured.

The Holmesian Wisdom for this card is “Well, there’s nothing for it now but a direct frontal assault. Are you armed?” This quote is from The Disappearance of Lady Frances Carfax.

The book that accompanies this deck also provides interpretations for each card under the headings “The Game” and “The Fog.” The former elaborates on the upright keys, while the latter expands on reversed meanings. An example from “The Game” for the Ten of Observation: “A life-or-death decision may leave you frozen. Troubles reach their height . . . Facing fears with resolution and acknowledging the power of past events.” An example from “The Fog”: “Troubles are over at last. . . Setting the record straight improves the situation.”