Well, it does seem like I have a lot of acquaintances dealing with loans these days. I did a Yes-No spread reading _back in June_ with the Lenormand asking if my friend would get a loan to refinance her home. Although some aspects of the reading seemed to say it was unlikely, The Sun blazed forth and she did, indeed, get the loan.

I have another acquaintance who is waiting for loan approval. The loan was full-steam-ahead until an underwriter discovered that this person had made ONE late payment on an existing loan back in November. All payments have been made on time since then – but apparently, she cannot be trusted with another loan until she has made payments on that loan on time for six months to a year. For reasons I won’t go into here, this person’s ability to get the loan approved has a direct impact on my life.

This time I am using the Freshly Squeezed Lenormand by Jean Hamilton-Fford. (To read my review of this delightful deck, click HERE .)

So let’s ask the cards: Will her loan be approved before the end of the year? 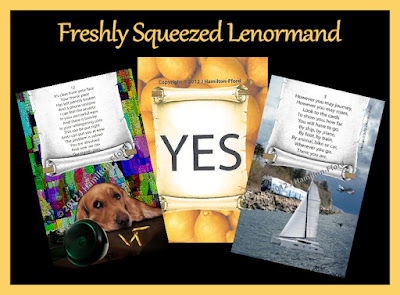 LOL, well, I probably don’t need to look any further than that middle card, wouldn’t you say? However, let’s see what else is here. These cards do not have the playing card associations on them, so the method of using reds (hearts, diamonds) for “yes” and blacks (spades, clubs) for “no” doesn’t readily apply. However, after consulting a reputable source, I see the following:

12 (traditionally the Birds) = 7 of Diamonds (red / yes)
Titled “Anxiety” in this deck, Card 12 encourages us to see the positive side of those things that seem to go wrong. It is certainly true that the loan approval delay has caused a lot of anxiety for many people. It is hard to see a “positive side” to it, but perhaps that will become clear at some point in the future.

3 (traditionally, the Ship) = 10 of Spades (black / no)
Titled “Journey” in this deck, Card 3 can suggest “that someone or something is making its way to you imminently or in the future.”


It looks like there is a small chance (10 of Spades) that the loan could be delayed past the end of the year, but the YES card and the red 7 of Diamonds association for Card 12 seem to outweigh that small negative implication (which, I feel, is more indicative of “delay” or temporary blockage than an outright “NO” answer to this question).

I am liking this answer, so let’s hope it isn’t simply a reflection of my preferences, wishes, and desires!