Sherlock Holmes Card of the Day: 7 of Analysis

The Sherlock Holmes Card of the Day is:
SEVEN OF ANALYSIS
(7 of Cups) 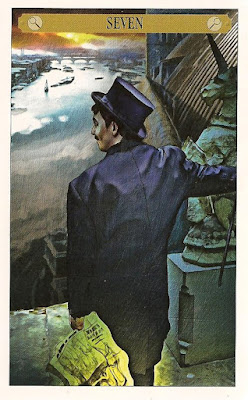 The quotation chosen to represent the entire suit of Analysis is “There are fifty who can reason synthetically for one who can reason analytically” from A Study in Scarlet. This comment is made, as you might expect, by Sherlock Holmes himself. It is prefaced by the following: “In solving a problem of this sort, the grand thing is to be able to reason backwards. That is a very useful accomplishment, and a very easy one, but people do not practise it much. In the every-day affairs of life it is more useful to reason forwards, and so the other comes to be neglected.” I love that.

The Holmesian Wisdom for the 7 of Analysis is “Never have I risen to such a height, and never have I been so hard pressed by an opponent” from The Final Problem. Again, as you might expect, this is Holmes talking about his nemesis, Professor James Moriarty. The card shows Moriarty “standing on the roof of a building, gazing out over the city of London with a look of cruel satisfaction.”

The book that accompanies this deck also provides interpretations for each card under the headings “The Game” and “The Fog.” The former elaborates on the upright keys, while the latter expands on reversed meanings. An example from “The Game” for the 7 of Analysis: “delusional belief in the power of the self. . . wishful thinking. . . caught up in unrealistic dreams.” Examples from “The Fog”: “cleaning the lens to get a clearer picture of the clues. . . implementing or manifesting your dreams. . . anticipating what the public needs.”

In the traditional Rider-Waite based 7 of Cups, the figure on the card seems to be trying to choose from among seven options that float in the air before him. With Moriarty, however, we have the distinct impression that he feels no need to choose. He wants it all, and he shall have it.