Sherlock Holmes Card of the Day: Mycroft Holmes / The Hermit

The Sherlock Holmes Card of the Day is:
Trump 9 / MYCROFT HOLMES
(The Hermit) 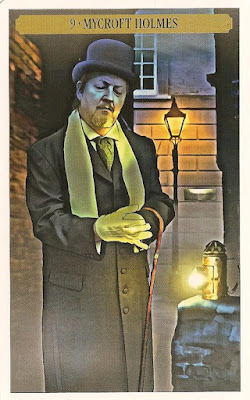 In The Sherlock Holmes Tarot by John Matthews and Wil Kinghan (Sterling Ethos), The Hermit card honors Sherlock’s elder brother, Mycroft. Considered by Holmes himself to have a mind of even greater genius than his own, Mycroft is a “shadowy figure of power within the British government.”

The Holmesian Wisdom for The Hermit is: “The Diogenes Club is the queerest club in London, and Mycroft one of the queerest men” from "The Adventure of the Greek Interpreter," which first appeared in the Strand Magazine in September, 1893. It is the first story in which Mycroft Holmes appears.

The book that accompanies this deck also provides interpretations for each card under the headings “The Game” and “The Fog.” The former elaborates on the upright keys, while the latter expands on reversed meanings. An example from “The Game” for The Hermit: “As plans mature, allow for a period of stillness and thought in which answers can be uncovered. Take the advice of an older or wiser person.” Examples from “The Fog”: “Operating without a guide or compass causes you to lose focus. Failing to listen to your inner certainty leads to false clues.”

Mycroft Holmes is generally seen as being a less energetic version of his brother, which is reflected nicely in this deck by having Sherlock represent The Magician and Mycroft represent The Hermit. The Hermit comes across, in general, as a much quieter, subtle character than The Magician. Whether following his own path of introspection or leading others down that path, The Hermit does not make a show of his activity and we often don’t even realize he is involved.