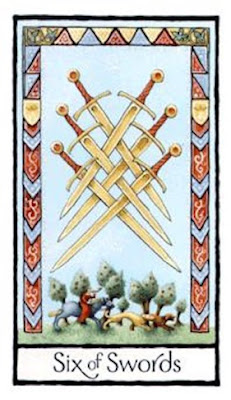 I’ve always liked the 6 of Swords in most decks as it has represented the opportunity to change what has not been working. Of course if we remember it is a Swords card, then we know that the card relates to our thinking and our ability to communicate. But of course this card has a general meaning of travel associated to it as well.

As other cards have shown, the Old English image differs slightly in its message to that of its traditional brother the Rider Waite. Of course we all know the image of the Rider Waite card of the six swords in a boat with its passengers and the ferry man. What those six swords seem to me to represent is that unless you understand why the original thought patterns you have, have caused you problems, then moving won’t solve them, as you just take them along for the journey! However, the card image does show us in its depiction of rough water on one side and smooth on the other, a degree of moving away from a difficult situation and towards something less fraught. So that sense of a brighter future exists.

The Old English doesn’t show us that transition from rough to smooth in its image, but it does most definitely show us movement. We have a female on a horse galloping along and ahead of her running two dogs. They all seem to know where they are heading: The direction is forwards! This card’s image then seems to speak to me of travel and of moving towards something new. Although it’s a Swords card, the image of the swords crisscrossed does seem to me to form some sort of barrier, and perhaps again it’s an indication that we must first understand our thought pattern in order for it not to be something that holds us back. The trees in this image are all in full leaf and fruiting. That sort of gives me the impression that the potential exists for a goal to come to fruition, but also the trees seem to be blown about by the wind, maybe reinforcing the air element of the Swords suit.

In the final conclusion, to me both the Rider Waite and the Old English speak of moving oneself towards something better. However, they both caution that in order to move into that new space one needs to understand the thought pattern that created the undesirable situation that they are now attempting to move out of.

I really do like these little drawings on the bottom of each of these Old English cards. They bring an extra dimension to my understanding of the traditional meanings to the cards.