Journey through My Decks: Page of Swords

In this series of posts, I plan to discuss all of the Tarot cards in order, using a different deck for each card. Today I'm exploring the PAGE OF BIRDS from The Merlin Tarot by R. J. Stewart, illustrated by Miranda Gray (The Aquarian Press). 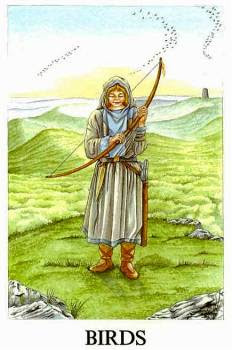 The Merlin Tarot uses Tree of Life associations as well as a system of Three Worlds and Three Wheels as its foundation. The suit of Birds is the equivalent of Swords in other decks. It is associated with the element Air and the direction East.

The Page of Birds is shown with a large bow (as yet undrawn), a full quiver of arrows, and a sharp dagger. The Page appears to be about to remove the bow from his or her shoulder, presumably to use it.

The Page of Birds is one of the "People of the East," described as "a child of Spring moving into Summer." (Stewart) The Page of Birds is also viewed as "Earth of Air." John Michael Greer tells us that Earth is negative, cool and dry -- its nature is stability. Air is positive, hot and moist -- its nature is separation. Earth and Air are considered weakening, incompatible, or antagonistic to each other.

When Earth combines with Air, "all the fine qualities of Air are weighed down, suppressed, suffocated" (Crowley). Earth gets in Air's "space." Air can't pass through Earth, so it has to go around it. Such an inconvenience when Air has so many important places to go! Of course the limitations imposed by Earth help Air take form and direct its energy toward specific goals, but Air is reluctant to acknowledge that benefit. Earth under the influence of Air can behave in an uncharacteristic manner: Tornadoes can uproot trees and send heavy objects flying. Air sculpts Earth as it blows across deserts and plains, over hills and through valleys -- creating changes that are alternately beneficial and destructive, depending on point of view.

Small wonder, then, that the keyword for this card in this deck is "Difficult." The obvious youth of the person on this card coupled with the keyword automatically makes me think of the expression "a difficult child." Stewart taps into that idea, discussing the Page of Birds as possibly obstinate, willful, or demanding yet also possibly highly intelligent -- "perceptive beyond his years" -- a child to whom less intelligent adults have no adequate response. This Page can have "inner conflicts that will only be resolved with maturity and experience."

Waite describes this Page (the Page of Swords in his deck) as vigilant, a quality that requires both mental activity (Air) and an awareness of physical surroundings (Earth). The appearance of this Page may alert us to get Earth and Air "energies" in balance within ourselves, so that they complement each other instead of opposing each other. Awareness of the limitations and opportunities afforded by my physical (Earth) environment  will help us make our ideas (Air) a reality. The challenge is to see things as they really are, not just the way they appear to us in our mind.
--------------------------
Sources:
- The Merlin Tarot Handbook by R. J. Stewart, illustrated by Miranda Gray. The Aquarian Press.
- The New Encyclopedia of the Occult by John Michael Greer. Published and distributed by Llewellyn Publications.
- Book of Thoth by Aleister Crowley, Frieda Harris (Illustrator). Publisher: Samuel Weiser, IncB - The Pictorial Key to the Tarot by Arthur Edward Waite. WeiserBooks.