Das Bruegel-Tarot by Guido Zibordi Marchesi (Lo Scarabeo) volunteered for this round, so here we go. 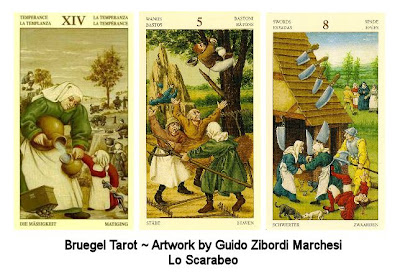 The proverb given in the Little White Book for this card is: "The burden becomes light for those who know how to carry it. (Everything has a right way of being confronted.)"

Okay, I am being told to deal with something that is out of balance or going to one extreme or another in my life. I need to do a better job of blending diverse elements of my life so that I create a pleasing, beneficial whole. And yes, the key to doing that is knowing how to "carry" or "confront" the various demands, challenges, and responsibilities that are placed upon my time and energy.

(2) Important but not urgent. Can be set aside for now, but don't forget.
FIVE OF WANDS (Ambition)

Oh dear, am I being too ambitious? Am I in danger of setting myself up for a fall? I sure hope not! Perhaps this card is telling me that I do need to be competitive in certain areas but not to the point of a knock down, drag out fight. Also, I think this card often refers to internal conflicts that need to be acknowledged and addressed to restore peace and calm to my life.

(3) Not important. Not urgent. Let it go. Forget it.
EIGHT OF SWORDS (Conflict, Bad Luck)

Proverb: "Two wives in one house cannot get along. (Only one person can be the boss.)"

The illustration on this card is quite a departure from the traditional Rider-Waite-Smith version, which depicts a bound, blindfolded woman surrounded by a ring of swords stuck in the ground. However, if we look at the issue of "control," we can see some similarities in the interpretation from the Bruegel deck.

The two women on the Bruegel card are fighting over who gets to be boss -- who gets to be in control. The woman on the traditional Eight of Swords is under the control of someone or something. I need to think about how much or how little I control an area of my life and what, if anything, I need to do about that. Since this position is "not important, not urgent, let it go, forget it," maybe I need to just let someone else be in control of something and not try to take charge.

All three of these cards are "positive" or "active" from an elemental standpoint (Temperance and Wands = Fire; Swords = Air). Not much sitting around and sipping tea here! But I get the distinct impression that I need to choose my battles (or activities) wisely and carefully.
on Thursday, January 31, 2013