Tarot Cards: The Emperor, Fours of all suits

Writing about the occult meaning of numbers, Paul Foster Case gives the following keywords for Four: "order, measurement, classification, recording, tabulation, and so on." Case goes on to write that "Qabalists make 4 the number of memory" and that "Beneficence ('good-givingness') is also assigned to 4." (The Tarot: A Key to the Wisdom of the Ages, Macoy Publishing Company)

In his book Numerology: Key to the Tarot (Whitford Press), Sandor Konraad writes that in divination, Four can represent achievement, marriage, and excessive concern with material things. In the Minor Arcana, Four is the number of Attainment.

Quoting from Numerology and The Divine Triangle by Faith Javane and Dusty Bunker (Whitford Press): "Four is stability, a 4-square consciousness, the symbol of law, system, and order. It is firmness, security, stability and conservatism. . . 4 is nature and relates to the earth." Key words for Four: "form, work, order, practicality, construction, stability, endurance, discipline." 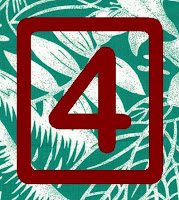 Gary Meister, CTM offers the key words "Reason, Practicality" for the number Four. He writes: "On a universal level, the creative process can be more or less automatic in its early stages. The beginning thought (#1) gives birth to a cooperation between your individual spirit and the Universal Spirit and creation is begun (#3). But without reason, without turning the creation into something practical (#4) the first three steps just keep happening, over and over, and never become a fully realized reality."

In Anna Burroughs Cook's Tarot Dynamics system (based in large part on Javane and Bunker): "Subject Card Four stands for incentive and security." 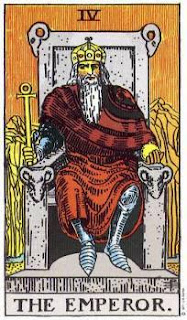 Concerning The Emperor (Card 4), Cook writes: "The Emperor intensifies your need to discover the truth in all matters . . . You're going to be a little more self-assertive and direct. Control." She notes that Card 4 means "a control issue, at work, home or both may bring your emotions closer to the surface, or cause you to be more protective about matters that impact your sense of belonging and security."

According to Javane and Bunker: "[The Emperor], ruling our conscious existence, represents reason, which is a function of the conscious mind. The Emperor therefore rules over and sets in order the reasoning, conscious elements of the material world. He supervises and controls through his ability to discern the truth in any given situation. It is his wisdom in handling affairs systematically that has placed him upon the throne."

In astrology, the Fourth House is known as the House of Home and Family. Ruled by the zodiac sign Cancer, known as a sensitive, self-protective sign. The house where Cancer appears on our birth chart indicates the area of life where we search for security.

Here are a few quotations about the number Four that I find especially relevant:

"I think getting beyond the four edges of an opportunity or challenge
is one of the basic skills you need in business."
~ Thomas Kinkade, Artist (1958-     )

"The four cornerstones of character on which the structure of this nation was built are: Initiative, Imagination, Individuality and Independence."
~ Eddie Rickenbacker, American Aviator (1890-1973)
on Monday, January 16, 2012