Journey through My Decks: 2 of Swords

In this series of posts, I plan to discuss all of the Tarot cards in order, using a different deck for each card. Today I'm exploring the TWO OF SWORDS from the Osho Zen Tarot (published by St. Martin's Press. Illustrations by Ma Deva Padma). 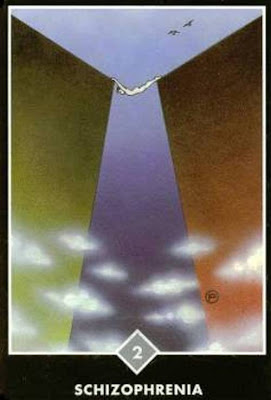 "Schizophrenia is not a disease that happens
to a few people - it is the normal state of
humanity. Everybody is divided, split."
~ Tarot in the Spirit of Zen: The Game of Life ~
by Osho (published by St. Martin's Press)

"The whole effort of Zen is how to drop this
schizophrenia, how to drop this split personality,
how to drop the divided mind of man, how to
become undivided, integrated, centered, crystallized."
~ Osho Zen Tarot: The Transcendental Game of Zen ~

In the Osho Zen Tarot, the suit of Clouds (Swords) represents Knowledge, Thoughts, and Mind. The Two of Clouds represents a state of mind that is divided, confused about which option to choose. Looking closely at the card, we see a human figure, face down, with his fingers on the top of one looming object and his toes on the top of another. His body hangs between the two. What are his choices? Should he let his arms go and fall head-first, or let his legs go and fall feet-first?

The commentary presented in the Osho Zen Tarot book responds: "The only way out of this dilemma is, unfortunately, to let go of both at once. You can't work your way out of this one by solving it, making lists of pros and cons, or in any way working it out with your mind. Better to follow your heart, if you can find it."

Everyday choices we make can be seen as reflections of a much larger choice that impacts every aspect of our lives. Osho writes: "You are born in a schizophrenic world. You have been given double standards. You have been taught materialism, and you have been taught spirituality, together. The whole society goes on teaching you contradictory things."

There is some consolation in discovering that there is no one correct "solution" to a dilemma, that it's time to let instinct, intuition, or feelings make the decision instead of the intellect. The other option -- to remain suspended between two options -- is probably not an option at all. Sooner or later, we will make a choice out of sheer exhaustion, and that may not be in anyone's best interest.

-----------------------------------
About the Deck: A native of India, Osho (a name he adopted in later life) was a highly controversial spiritual teacher who (according to his epitaph) was "Never Born, Never Died. Only Visited this Planet Earth between Dec 11 1931 -  Jan 19 1990" (A Sagittarius. I should have known.) The deck's artist, Deva Padma (Susan Morgan), is an American who lived as part of the community that surrounded Osho. Based on the teachings of Osho, the Osho Zen Tarot is "a wake-up call to tune in to sensitivity, intuition, compassion, receptivity, courage and individuality." (from the book packaged with the deck)
on Friday, January 06, 2012