Journey through My Decks: 3 of Swords

In this series of posts, I plan to discuss all of the Tarot cards in order, using a different deck for each card. Today I'm exploring the THREE OF SWORDS from The Wheel of Change Tarot by Alexandra Genetti (Destiny Books). 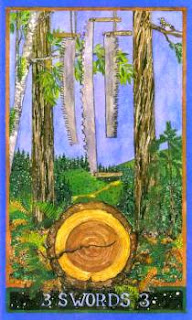 Three Blades in the Falling Forest

Alexandra Genetti tells us that in the Tarot, the Pips generally symbolize "the day-to-day events of life and the simple lessons we learn in our relationships and actions. . . Each number represents a particular stage in the growth process." She writes: "Three represents synthesis, the action that joins the opposites that were divided in the two." Genetti also views Three as "the number of action and change. . . symbolic of the initiating principle of God the creator or creatrix."

Genetti associates the suit of Swords with the element air, the direction east, the season of spring, and the dawn. The suit "signifies the evolution of the realm of humankind out of the animal kingdom represented in the watery suit of Cups." The Sword, like "our human capacity for individual thought," divides and separates us not only from the animals but from each other. It is "the symbol of the penetrating intelligence and the mental faculties, especially the creative capacity for new ideas." As a masculine suit representing "the active principle and direct movement in the world of ideas," Swords penetrate and make an impression on whatever they touch.

Symbols on the Three of Swords, as described by Genetti:

* Tree saws: the action of cutting through natural elements to build anew
* Fallen tree with exposed rings: dependent layers of life on earth; the body of the earth and our own bodies
* New fir tree springing up: the earth's ability to heal herself in the face of our destructive technology; the need to account for the time that nature needs to recover
* Clear-cut land in distance: what happens when we overstep our bounds and use the earth beyond its ability to return to a productive state

As a Daily Card, the Three of Swords from this deck prompts me to examine how I allocate my own internal resources and energy. For example, should I respond to criticism with argument or with reflection? This card also encourages me to evaluate my uses (or abuses) of my own natural resources (body, emotions, mind, energy).

I may also need to ask myself if I am *hearing* what knowledgeable people are telling me about the use of my resources. Am I carefully considering options and studying the facts before I act?

---------------------------
About the deck: Alexandra Genetti writes that the Wheel of Change cards "express the passion I feel for life, for the earth and her amazing living diversity. They are an expression of the hope I feel that we will one day be able to live immersed in the balance of the natural world." She notes that the deck is the result of ten years of steady work and study. Her goal is to "facilitate self-knowledge and sympathetic understanding of others and of the natural world of which we are a part."
on Saturday, January 28, 2012