REVIEW (by Zanna): The Gaian Tarot 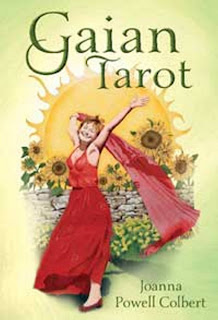 I first encountered Joanna Powell Colbert's Gaian Tarot when I ordered the second edition of the Major Arcana cards back in 2004. I received a deck signed by Colbert: 22 glorious 5-1/4" by 3-1/2" cards printed on heavy stock, with shiny gold backs and a small spiral notebook bound in the same gold stock. I was attracted to these cards because of the images with their rich, natural colors and the real people who served as models.

"From the joyful brilliance of a golden field of sunflowers to the roiling waves of a sapphire-blue sea, our planet's divine beauty elicits a sense of wonder and reverence. Deeply spiritual and rooted in the natural world, the Gaian Tarot deck offers a true connection to our Earth Mother.
Presenting a lush, contemporary, and multicultural world steeped in Gaian myth and lore, internationally acclaimed artist Joanna Powell Colbert beautifully updates the classic Rider-Waite-Smith archetypes. Radiantly bearing new life, the gardener shines as the reimagined Empress, while the Magician is transformed into a ritual drummer . . ." 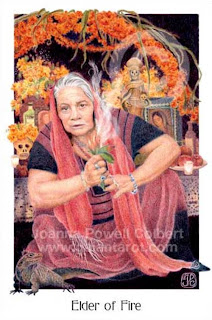 The Gaian Tarot consists of 78 cards and a 288-page guidebook. Some of the titles on the cards match those on traditional Tarot decks, but some do not. For example, instead of The Fool we have The Seeker; The Empress becomes The Gardener; and The Hanged Man is The Tree. The Minor Arcana cards are given elemental names: Air, Fire, Water, and Earth. The Court Cards are called Child, Explorer, Guardian, and Elder.

The guidebook provides an 8-page Introduction that covers The Meaning of "Gaian," Creating the Gaian Tarot, Tarot Structure, and Using the Deck and Book. As a group, the Major Arcana cards are described as "Soul Lessons." For each Major Arcana card, Colbert provides sections titled "When you get this card in a reading...", "When you read the Shadow side of this card," "Deepen Your Understanding of [Card Title]," Symbols, Journal Questions, and an Affirmation. Each Major Arcana card is given a subtitle: The Seeker (The Fool) is "A New Beginning," The Magician is "Spirit Made Manifest," and The Priestess (The High Priestess) is "Dreams, Voices, Visions." 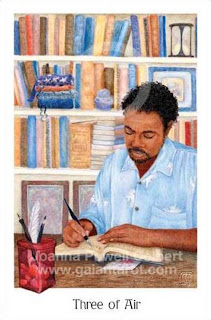 The Minor Arcana cards are described as "Elements, Numbers, People." Colbert discusses the nature of the elements, the meaning of numbers, and the Court Cards as a group. She provides a brief introduction to the Aces, Twos, Threes, and so forth before discussing specific cards in detail. She also gives keywords for each number: Aces are "Birth, Potential, Gift of Grace," Twos are "Balance, Receptivity, Attraction, Test of Choice," and so forth. For each numbered card, Colbert gives an explanation of symbolism, "When you get this card in a reading...", "When you read the Shadow side of this card..." and an Affirmation.

Descriptions of the Court Cards are grouped under Children (Learning, Wondering, Beginning), Explorers (Seeking Challenges, Being Driven By a Quest), Guardians (Protecting and Nurturing the Community), and Elders (Holding Wisdom, Giving Counsel). As with other cards, each Court Card section has subsections for symbolism, "When you get this card in a reading...", "When you read the Shadow side of this card..." and Affirmation. 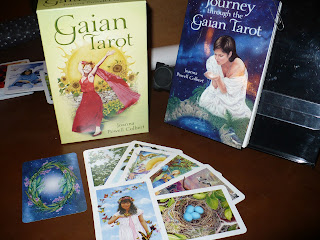 At the back of the book is a section called Working with the Cards, which contains information about Reading the Cards Intuitively, A Card a Day, and The Art of Asking Questions. We are then given some positional definitions for 3-card readings as well as several spreads. A Bibliography provides an excellent list of resources for further study.

Looking at the 3-1/4" by 4-1/2" cards in the Llewellyn set, I have to say that the colors are not as deep and vivid as those in the Major Arcana deck I received in 2004 from the author. However, the coloring is still very appealing. The glossy stock is not as heavy as my Major Arcana set, but it is comparable to most of the decks I own. The images have a white border which I think I would make narrower if I had a choice. If you like to trim the borders from your cards, you may have trouble with these because bits of the images extend into the borders. You might find yourself amputating the tail of a fish on The Canoe (The Chariot) card or the antlers of a deer on Gaiai The World. The titles of the cards appear at the bottom of each card in an unobtrusive, easy-to-read serif font. 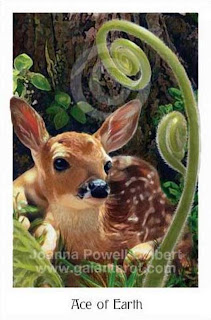 The back of the cards features a lovely wreath of green leaves and purple flowers set against a deep blue night sky. In the center of the wreath we see a large, glowing orb of light.

The cards can be shuffled without difficulty, although I always recommend against using the "poker card" shuffle with Tarot cards. I much prefer the push-pull method, or laying the cards face-down on a large surface and spreading them around.

The art is realistic, as one might expect in a deck that is connected so closely with Mother Earth. It is clear that real people were used as models for many if not all of the cards. On her "Thank You" page, Colbert expresses appreciation to her husband "for being willing to model for half a dozen cards on a moment's notice." Joanna Powell Colbert herself appears on the Nine of Earth card.

I love that the people on the cards range in age from very young to very old. They are diverse in terms of race, gender, and cultural background. 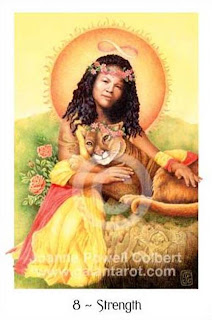 The coloring of the cards brings to mind words such as "rich," "deep," and "natural." The Fire cards sizzle with red and orange; Water cards overflow with peaceful blues, greens, and purples; brown and green roll through the Earth cards; and soothing shades of blue breathe life into the Air cards.

Lifelike animals appear on many cards, and the scenery contains a delightful amount of detail.

The book Journey through the Gaian Tarot offers an inspiring collection of facts, mythology, numerology, symbology, and mysticism. Colbert skillfully blends the Tarot with the natural world, introducing us to Gaia, "the primal Greek goddess who embodies the earth" and the concept of earth-centered spirituality, which means "to both give and receive spiritual sustenance from the natural world."

I especially like Colbert's discussion of the themes of each card and her use of the term "the Shadow side" instead of "Reversal." Her discussion of the symbolism on each card is extremely useful and enlightening. The Journal Questions encourage deeper understanding and enrich the reader's experience with the cards.

If you prefer decks that strictly adhere to the traditional names for the cards, you might be put off by the changes Colbert has made to these cards. However, I do not find this to interfere with my enjoyment of the cards. Her new names are logical and meaningful.

Mary K. Greer has described The Gaian Tarot as a "doorway into a community of people living close to the land and its creatures." I agree. The people, settings, and messages of these cards will enhance your life, no matter what spiritual path you follow.

To read my interview with this deck, click HERE.

For more information about Joanna Powell Colbert and The Gaian Tarot, visit http://www.gaiantarot.com/ and http://gaiantarot.typepad.com/artists_journal/ .
on Saturday, November 05, 2011