Each Sunday I hope to share a card from one of my decks along with a quotation that conveys at least part of the message of that card.

Today's Cards and Quotes features the EIGHT OF PENTACLES from the Crystal Visions Tarot by Jennifer Galasso (U.S. Games Systems, Inc.) The Eight of Pentacles is often considered to refer to an apprentice, someone who is working to hone a skill, hoping to become an expert. On the Crystal Visions card we see a woman at her spinning wheel, paying close attention to what she is doing. The quotation I have chosen to go with this card is under the image of the card. 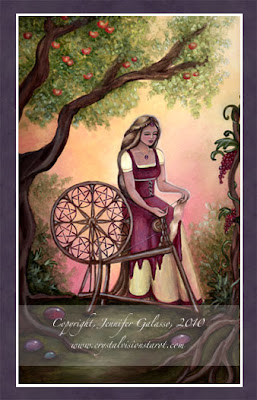