A Reading with the Playing Card Oracles Deck

Ana graciously agreed to review what I did and offer suggestions and comments that would help me benefit even more from this reading.

Below is my reading, followed by Ana's comments. Thank you so much, Ana, for taking the time to do this! I know my blog readers will find it useful!

In her book, Ana Cortez rightfully asserts that her method of card reading "is not meant to be mastered in a short period of time."

The purpose of this four-card spread -- called The Present Spread -- is to provide a "snapshot" of the time at hand as well as the four weeks to come. My question is: What do I need to understand about  my jewelry-making business now and in the next four weeks?

Following the instructions in The Playing Card Oracles book, I shuffled the cards and turned four of them over, as if turning a book page -- in other words, NOT by flipping them head over tail, as is commonly done when playing card games. Cortez writes that "Flipping negates the nature of the deck as a book and reverses the original direction of the card, potentially altering the way the card is read." 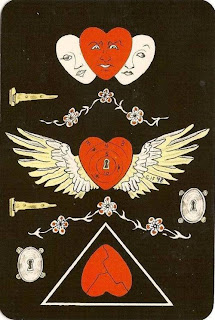 Position 1: The Head Position (ruled by the suit of Diamonds)
THREE OF HEARTS (The Clutch)

Note: This position tends to dominate the general character of the reading. It takes on additional significance when the question refers to finances, self-esteem, or creativity -- or questions specifically related to the head and face.

I have drawn the Three of Hearts in this position. This position is ruled by Diamonds. When Diamonds are paired with Hearts, the result is often unpredictable energy or a lack of self-restraint.

Threes suggest that things are fluctuating and unstable. It may be time to make a choice or consider an opportunity. I am being encouraged to tune in more closely to my personal goals and where I want to go with my jewelry-making business. The suit of Hearts tells me that emotions play a large role here. I need to understand what my emotional needs are and whether those are being served by my current approach. Am I just adding emotional drama and stress to my life?

I confess that the illustration on this card is a bit puzzling to me. On the card I see three connected hearts, a single heart with a keyhole, and a fragmented heart. There are a total of FIVE Hearts on the card, yet the card is the THREE of Hearts. 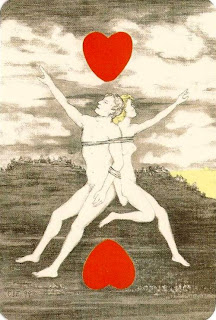 Position 2: The Throat Position (ruled by the suit of Clubs)
TWO OF HEARTS (The Lovers)

Note: The card in this spot usually refers to ideas and communications. This can include legal documents and other written or verbal agreements. It also relates to social relationships.

I have drawn the Two of Hearts in this position. This position is ruled by the suit of Clubs. Hearts paired with Clubs can suggest a fertile imagination and strong creative ability.

The number Two indicates an initial exploration outside of ourself, taking into account both self and "the other." It can suggest partnership and cooperation or opposition and division. As mentioned above, the suit of Hearts indicates emotional involvement. The illustration depicts what Cortez calls "a heartfelt entanglement" of some sort, not necessarily limited to male/female lovers. Am I being encouraged to consider a partnership with someone else? 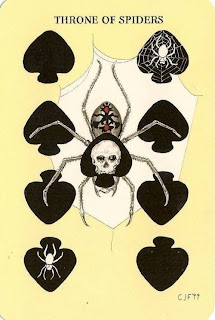 Position 3: The Torso Position (ruled by the suit of Hearts)
NINE OF SPADES (The Throne of Spiders)

Note: This position includes the heart, solar plexus, womb, and sexual organs. Therefore, it relates to questions of love, reproduction, and emotions in general. Hidden, unconscious issues may appear in this position, or it may refer to questions about one's mother. Health, vitality, and healing are also included. This position is also likely to reveal the "heart" of the matter.

I have drawn the Nine of Spades in this position. This position is ruled by the suit of Hearts. Hearts and Spades are called "The Gravitational Partnership." Paired with each other, they can indicate security and dependability.

Nines often speak of endings, final trials, or the last stages of something. There is a sense that moderation is lacking. We are moving at full tilt through the passageway between the pips and the court cards. Nines are occasionally seen to represent people themselves, typically young people.

With the Nine of Spades, we are looking at something that has gotten way out of hand, especially in a physical or material sense. Energy and resources are being drained and depleted. There is a sense of overwork, burden, or even addiction/co-dependence.

I'm speechless at this point. I have invested a lot of money and time into my jewelry-making business. Is this card saying that I have wasted enough money and time on the enterprise and that I should let it go? Or is there a way to "cut the load" without dumping it altogether? What is it that is actually burdening me? The feeling that I *need* to make money with the jewelry or the desire to create the jewelry in the first place? And what do I make of the Hearts/Spades partnership? 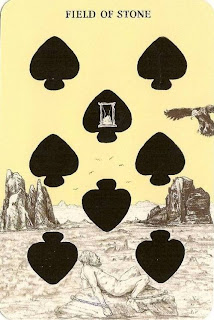 Position 4: The Foot Position (ruled by the suit of Spades)
EIGHT OF SPADES (Field of Stone)

Note: This position corresponds to the most practical, fundamental areas of life. This might include housing, possessions, career, daily routines, and living habits. One's father is also a possible subject for this position.

This position is ruled by Spades, and I have I have drawn the Eight of Spades here. This is somewhat comforting. Spades can carry largely negative (or negative-seeming) energy, and the Eight of Spades has a history of being considered a card of ill omen (the unluckiest card in the deck). It can suggest difficult karma, obstacles, bad timing, a threat -- or a need to wait and rethink strategies. The fact that my card is dignified in this position does offer a wee bit of hope, but not a lot.

The Foot Position makes me think of the expression "the bottom line." It seems to me that the Eight of Spades is pointing out that my timing is terrible in this case, and that I need to hold off on further expansion until the timing is better. The figure on this card is helpless, tied to a rock. Circumstances (the economy, for example) are beyond my control.

The reading contains two Red (Heart) cards and two Black (Spades), suggesting a balance of energy. Hearts and Spades are called "The Gravitational Partnership," which indicates security, dependability, practicality, and traditional values. All of this seems encouraging.

The "First Witness" (geomancy by number) indicates the beginning stages of the situation.

The pattern created with the asterisks above is called AMISSIO, ruled by Venus. It represents "A loss. Diminishing. That which is taken or given away. Emptying out. Shedding an 'old skin.' Letting go." Interestingly, in astrology the planet Venus rules jewelry.

This "Second Witness" (geomancy by color) corresponds to the unfolding of circumstances as time progresses.

The pattern created with these asterisks is called FORTUNA MINOR (ruled by the Sun). It represents "Lesser fortune. Exterior protection. Help from outside. Not very positive."

We now combine the testimony of the two "Witnesses" to determine a "Judge."

Overall, I don't get positive vibes from these cards concerning the matter in question. There seems to be a lot of loss here and almost no encouragement on the horizon. At the same time, the bigger picture shown by the Gravitational Partnership of the Hearts and Spades could suggest that I might be okay if I just "hold steady" right now rather than completely discontinuing the jewelry business. The outlook for the next four weeks isn't good, but the Judge does offer a small amount of encouragement that things may eventually improve.

Let's see what Ana Cortez says about my trial run with her deck:

Very ambitious and precise with your information I see here. Good job on many counts! I do SO appreciate the recent attention you have given to my work :-)

So regarding your reading. Yes, I see that this is in no way time for expansion, as you yourself surmised. The 8 of Spades being dignified in the Spade position, as you mentioned, gives this card greater gravity and power and always when you push forward with this card you will encounter only obstacles. And so magnified for you in regard to everything most practical. That being said... I would surrender instead to stillness and see what opens up for you in your heart.

There is beautiful heart energy nurturing this reading but it is floating around at the top of the spread. We are going to bring it DOWN. :-) EVENTUALLY :-)  So... the lovers being in the thinking and mental position tells me that you have a dream of absolute devotion to your work, so I would spend some quiet time and ask your heart what it would like in your creative life. Put your hand over your heart and whisper the question directly to it :-) Then listen!!! Write it down, so your head is in sync with your heart.

There is something on it's way out, as witnessed by the 9 in the heart position, so dream with your heart as to what you would like to come to you next. As you mentioned, the three is begging direction and manifestion, and it is the governing energy of this reading (top position). A challenging influence. Again, once you tune in to your heart and ask it what IT wants, new directions will open up for you.

I hope this is helpful.

Fondly and with great thanks,
--Ana C."


To read my recent interview with Ana, please click HERE.