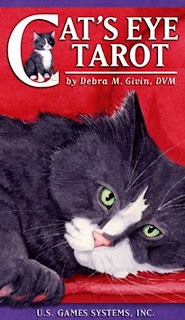 "Cats can teach us many things about how to make the best of almost any situation. Cats are pleasing to the eye, complex in their behaviors, and mysterious in their moods, providing a “purrfect” model for a visually evocative medium like the tarot. Every card in Cat’s Eye Tarot tells a story, illustrated from a feline point of view. Let these cats guide you as you use the tarot to learn about yourself and your cat. The card meanings and numbering follow Rider-Waite interpretations, with reptiles, fish, birds, and mice replacing the usual suit symbols. Even the newcomer to tarot will be able to relate to these delightful images of cats and learn valuable lessons from them." 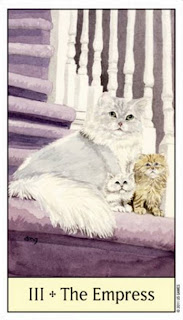 The creator of this deck is Debra M. Givin, DVM, who has been a practicing veterinarian for 28 years, 22 of them in an exclusively feline practice. In her Introduction to the Little White Book (LWB), Givin writes: "For me, the tarot has become a tool for reflection and a way to think through a situation."

Many of the images on the cards are compatible with the traditional Rider-Waite-Smith interpretations. For example, on the Four of Pentacles, a cat has one mouse in its mouth and is holding down three others with its paws, as if hoarding them. The Magician is surrounded by symbols of the four elements: in this case, a fish (Water), a lizard (Fire), a bird (Air), and a mouse (Earth). 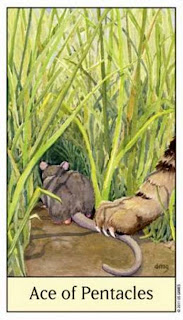 The LWB provides several keywords and a description for each card, along with how it might be interpreted in a reading. The keywords follow the RWS tradition as interpreted by Joan Bunning in her book Learning the Tarot. For example, the keywords for the Seven of Cups are "wishful thinking; options; dissipation." The keywords for The Tower are "sudden change; release; downfall; revelation."

In the back of the LWB is a Nine Lives Spread based on the old proverb: "A cat has nine lives: 3 he plays, 3 he strays, and 3 he stays." Nine cards are drawn -- three for "Youth", three for "Mid-Life," and three for "Maturity."

The cards measure 2.75" x 4.75" and are printed on glossy stock the same weight as most of my Tarot decks. There is a white border around the images on both the front and back sides. Card titles are printed in black on a pale yellow bar under the card image. Major Arcana cards are numbered, with Strength as Trump 8 and Justice as Trump 11. The image on the backs of the cards is a close-up of a long-haired, green-eyed tabby cat's face. If you use reversals, you'll be able to identify reversed cards by noting which way the image on the back faces. 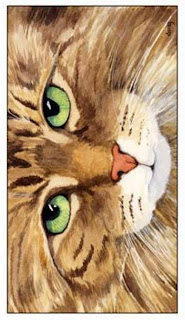 The art is realistic, with a soft, gentle quality that emphasizes the grace and beauty of the cats. Purple is a prominent color on most Major Arcana cards. Wands cards have orange backgrounds (representing creative energy); the Wands cats are ginger tabbies. Swords cards feature shades of blue (intellectual energy) and Siamese cats (some appear to have long hair, which would make them Himalayans or Balinese). Pentacles cards have a lot of earthy green and brown, and feature brown tabby cats. For the suit of Cups, Givin has chosen to depict black and white cats against a red background, representing emotional energy. Many of the Wands cards incorporate reptiles. Cups cards often include fish. Pentacles cards incorporate mice, and Swords cards include birds. These creatures are the cat's natural prey, as well as being associated with the four elements.

The Court Cards are lovely, with kittens as Pages, young adult cats as Knights, and adult cats as Queen and King. As a long-time cat lover, I am delighted with the way Givin has captured the many moods of cats -- contemplative, curious, playful, alert, threatening, frightened, relaxed, and affectionate (to name a few). 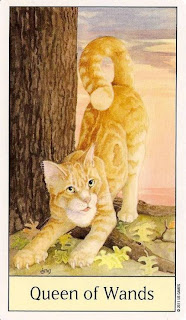 If you dislike themed decks or cat decks, this is not the deck for you. I feel that it does incorporate a fair amount of the traditional card meanings, but it is certainly not an RWS "clone." As Givin notes: "There are few, if any, esoteric symbols." I think anyone who enjoys cat-themed decks will find these cards a pleasure to work with. Because each suit has a consistent color scheme, the reader can quickly identify the dominant energy in a reading. I, for one, am pleased to add it to my family of feline Tarot cards. Givin advises us to "let these cats guide you as you use the tarot to learn about yourself and your cat." I look forward to doing just that.

Listen to the Beyond Worlds Tarot program in which Dr. Given discusses the Cat's Eye Tarot:

In accordance with the FTC Guidelines for blogging and endorsements, I hereby disclose that this Tarot deck was provided by the publisher for free. Other than the occasional review copy, I receive no monetary or in-kind compensation for my reviews.  The substance of my reviews is not influenced by whether I do or do not receive a review copy.