A Journey through My Tarot Decks (by Zanna): Six of Wands

In this series of posts, I plan to discuss all of the Tarot cards in order, using a different deck for each card. Today I'm exploring the Six of Staves from The Goddess Tarot by by Kris Waldherr, published by U.S. Games Systems, Inc. 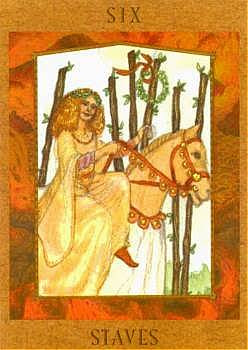 Keywords provided by Waldherr:
victory, acknowledgement, honor
The suit of Staves in The Goddess Tarot is associated with the Norse goddess Freyja, also spelled Freya. Waldherr describes the suit of Staves as "the active aspect of the Divine Feminine," conduits that "channel intense energy to areas of our lives where they can encourage growth." As the goddess of creativity, fertility, and beauty, Freyja represents a dynamic, adventurous spirit that initiates new endeavors with confidence and passion.

The fiery red-orange border around the image on this card is repeated on all Staves cards in this deck. On the Six of Staves we see a triumphant woman riding a docile horse. In her hand she holds a stave bearing the laurels of victory. She also wears a laurel wreath on her head. Waldherr writes that this card "offers the promise of victory after the inner struggle explored in the previous card of this suit."

In Book T*, the Six of Wands is linked with the energy of Jupiter (planet of good fortune, optimism, expansion, and abundance) and Leo (a fixed Fire sign known for being exuberant, generous, creative, and egocentric). It is known as the card of "victory after strife."

DMs provided by Waldherr for the upright Six of Staves: "Victory! Enjoying success after much hard work and struggle. Acknowledgement and honor from those around you. The fruits of courage and integrity. Integration and harmony."

Reversed or weakly aspected, the card can mean: "Victory is elusive. You've done the work, you deserve the honors, but they haven't come – perhaps because of a lack of awareness in those around you."

*Book T - The Tarot, Comprising Manuscripts N, O, P, Q, R, and an Unlettered Theoricus Adeptus Minor Instruction. A Description of the Cards of the Tarot with their Attributions; Including a Method of Divination by Their Use. A public domain manuscript.
on Tuesday, November 16, 2010