A Journey through My Tarot Decks: Four of Wands

In this series of posts, I plan to discuss all of the Tarot cards in order, using a different deck for each card. Today I'm exploring the Four of Wands from The Celtic Tarot by  Courtney Davis, published by The Aquarian Press. 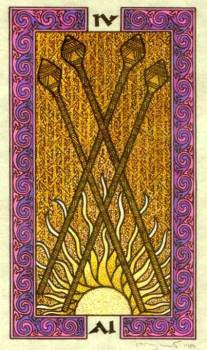 In her book, The Celtic Tarot (Aquarian Press), Helena Paterson explains that in this deck, the suit of Wands represents "the Spirit of Primal Fire, the mystical symbol which awakens the spiritual will of man." It expresses the idea of initiating magical or mysterious changes. Purple and violet swirls form the borders on all Wands cards in this deck, symbolizing spiritual and divine energies.

The numbered cards of the Minor Arcana contain geometric arrangements of wands, swords, cups, and coins rather than scenes. Thus the Four of Wands "are resting on each other and form a diamond-shaped archway." We see a setting sun – symbol of rest and repose. . . completion of the matter. (Paterson)

In my Tarot system*, the number Four represents the potential for stability, protection, structure, tangible achievement, caution, conformity, practicality, and stagnation. In astrology, the Fourth House is called the House of Home and Family, which gives additional support to Paterson's view of the Four of Wands as it relates to that area of life.

Instead of using reversals, Paterson outlines a system that interprets cards as "dignified" or "ill-dignified." The meaning of a card can be displaced, held in check, or reinforced by surrounding cards. Divinatory Meanings provided by Paterson for the Four of Wands are:

* Please note: My numerological keywords are based on personal experience and many different sources accessed over a period of several years.
on Tuesday, November 02, 2010