A Journey through My Decks: SEVEN OF WANDS (by Zanna)

In this series of posts, I plan to discuss all of the Tarot cards in order, using a different deck for each card. Today I'm exploring the Seven of Wands from The Mythic Tarot by Juliet Sharman-Burke and Liz Greene, with illustrations by Tricia Newell (published by Fireside/Simon & Schuster, Inc.) 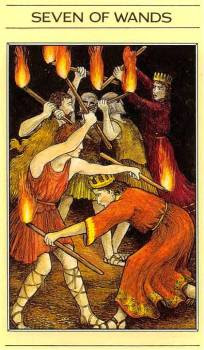 Like all of the Wands cards in this deck, the Seven offers us another encounter with the celebrated hero Jason. Here we see Jason's battle with King Aeetes of Colchis, who is dressed in a flame-colored robe and wields a flaming Wand. In fact, all six participants bear flaming Wands. Jason has two, bringing the total to Seven.

The suit of Wands (Fire) is often associated with creativity. Juliet Sharman-Burke and Liz Greene tap into this symbolism by describing the Seven of Wands as auguring "a struggle with other people's creative ideas." The competition is keen, and we cannot afford to rest on our laurels. We must be willing not only to fight for what we want, but to continue fighting in order to keep it.

DMs provided by Sharman-Burke: "Stiff competition must now be faced. Renewed determination and courage are necessary."

Sharman-Burke encourages us to "notice how the Seven follows the Six and determine, from your own experience, how success affects you."

About the deck: The Mythic Tarot is based on Greek mythology and its relationship to "essential human experiences and essential human patterns of development" or "archetypal experiences" (Sharman-Burke/Greene).