A Journey through My Tarot Decks: Five of Wands

In this series of posts, I plan to discuss all of the Tarot cards in order, using a different deck for each card. Today I'm exploring the Five of Wands from the Fantastical Creatures Tarot by by Lisa Hunt and D.J. Conway, published by U.S. Games Systems, Inc. 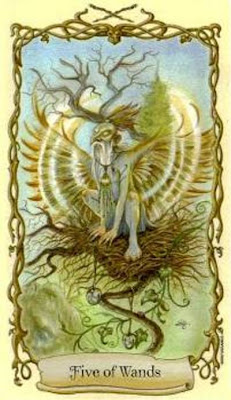 Fantastical Creatures Tarot
Five of Wands
Japanese Tengu
Unforeseen obstacles
On this card we see a representative of the tengu (or ten-gu) – Japanese mountain and forest goblins with supernatural powers. The Japanese Buddhist Statuary web site tells us:

"The patron of martial arts, the bird-like Tengu* is a skilled warrior and mischief maker, especially prone to playing tricks on arrogant and vainglorious Buddhist priests, and to punishing those who willfully misuse knowledge and authority to gain fame or position."

D.J. Conway tells us that on the Five of Wands, the tengu's feathers and bright wings reveal its spiritual nature. The pair of hanging bells indicate "that both positive and negative energies are vital parts of creation, represented by the twisting vine."

Book T** calls the Five of Wands “The Lord of Strife” and relates it astrologically to Saturn (lessons, limitation)  in Leo (fixed Fire; exuberant, creative, egocentric, with a talent for showmanship).

Divinatory Meanings provided by Conway: "An unforeseen obstacle or opposition suddenly appears in your path. Malicious gossip could cause you harm. New competition threatens your relationship or career."


* "The literal meaning of Tengu is "Heaven Dog." In Chinese mythology, there is a related creature named Tien Kou (Tiangou ??), or "celestial hound." The name is misleading, however, as the crow-like Tengu looks nothing like a dog. One plausible theory is that the Chinese Tien Kou derived its name from a destructive meteor that hit China sometime in the 6th century BC. The tail of the falling body resembled that of a dog, hence the name and its initial association with destructive powers." – Japanese Buddhist Statuary web site

** Book T - The Tarot (an initiatory manual for the OGD) Comprising Manuscripts N, O, P, Q, R, and an Unlettered Theoricus Adeptus Minor Instruction, A Description of the Cards of the Tarot with their Attributions; Including a Method of Divination by Their Use.
on Tuesday, November 09, 2010