A Journey through My Tarot Decks: The Emperor


In this series of posts, I plan to discuss all of the Tarot cards in order, using a different deck for each card.

This week's card is The Emperor (Trump IV) from Tarot of Northern Shadows (illustrations by Sylvia Gainsford, book by Howard Rodway). 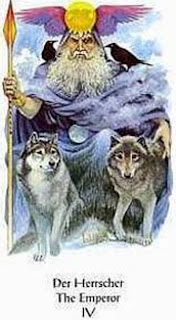 It's hard to imagine a more appropriate Emperor for this deck than the Norse god Odin, aka Alfödr (All-father), creator of all, god of poetry, wisdom, hosts, and the dead (he lives at Valhöll, or Carrion-hall, and it was said that he could awaken the dead to learn secrets from them).

In his book Norse Mythology: A Guide to the Gods, Heroes, Rituals, and Beliefs, John Lindow tells us that etymologically, Odin's name meant something like "leader of the possessed." In the myths he uses more than 150 alternate names -- some of which, I suspect, cannot be repeated in polite company!

With his brothers Vili and Vé, Odin created the cosmos out of the body of the proto-giant Ymir. In his Prose Edda, Snorri Sturluson writes: "[Búri] begat a son called Borr, who wedded the woman named Bestla, daughter of Bölthorn the giant; and they had three sons: one was Odin, the second Vili, the third Vé. And this is my belief, that he, Odin, with his brothers, must be ruler of heaven and earth; we hold that he must be so called; so is that man called whom we know to be mightiest and most worthy of honor, and ye do well to let him be so called."

Sylvia Gainsford has drawn Odin with his two ravens, Hugin (thought) and Munin (mind). Sturluson tells us: "The ravens sit on his shoulders and say into his ear all the tidings which they see or hear; they are called thus: Huginn and Muninn. He sends them at day break to fly about all the world, and they come back at undern meal [breakfast time]; thus he is acquainted with many tidings. Therefore men call him Raven God..." John Lindow notes that Migration Period bracteates (a type of coin) "frequently portray a figure with birds near his head, and many observers believe this motif is Odin and his ravens."

At The Emperor's feet sit two wolves, Geri and Freki, the "Ravenous Ones." According to Sturluson, Odin gives the wolves his own food. He adds: "On wine alone the weapon-noble Odin ever lives."

If you look closely at Odin, you will see that he has only one eye. The seeress of Voluspo declares: "I know where Othin's eye is hidden, deep in the wide famed well of Mimir..." This passage is usually understood to mean that Odin gave away one of his eyes to gain mystic vision.

In his right hand, Odin wields his magical spear Gungnir, made by the dwarfs. Runic symbols are engraved on the ashwood shaft. On Odin's finger he wears the ring Draupnir. Lindow describes Draupnir as an "arm ring known to magically replicate itself."

In Gainsford's drawing, Odin is wrapped in a blue-grey mantle representing the sky and clouds. The life-giving sun is the central feature on his eagle helmet, and the Nordic moon shines at his waist. His knees form snow-capped mountains with forested slopes. Note the little, tiny house down by his feet. Thus are we mere humans to the mighty grandeur that is Odin!

The Emperor calls our attention to matters of leadership, authority, and discipline. Reason and intellect take precedence over emotion, encouraging us to strive for objectives confidently and decisively. If this is not happening in our life, we may need to examine how immaturity, loss of strength, or unrealized potential play a part. We also need to consider the possibility that we are relying too much on logic and intellect where compassion and intuition are needed.


About the deck: "This Tarot portrays the roots of Norse and Celtic belief along with traditions and tales whose origins are lost in the mists of time -- shadows of a familiar dream." (Sylvia Gainsford)