A Journey through My Tarot Decks: The Chariot

In this series of posts, I plan to discuss all of the Tarot cards in order, using a different deck for each card. This week's card is The Chariot (Trump 7) from The Ancestral Path Tarot by Julia Cuccia-Watts. 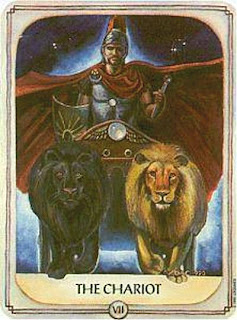 The Ancestral Path Tarot uses multi-cultural, cross-temporal images to convey the message of each card. The chariot and charioteer -- prominent in myth and history -- serve well as the key images for Trump 7, The Chariot.

In Roman times, the chariot was primarily a vehicle of war and aggression. The Chariot card can also symbolize “the System” -- governmental systems, with the dark and light lions representing negative and positive leaders.

Ultimately, our goal must be to channel aggression into self-mastery. The battle is internal, and we must bring spiritual, mental, emotional, and physical energy to bear.

The two lions on this card – one ebony and one golden – are symbols of duality and also emphasize the solar nature of the card (in astrology, the Sun rules the zodiac sign Leo, the Lion). However, in Book T, the OGD associates this card with the sign Cancer, a water sign ruled by the Moon. If we look closely at the chariot driver’s breastplate we see both solar and lunar decorations. A crescent moon forms the clasp of his cloak. Clearly both luminaries contribute to the meaning of this card.

In The New Encyclopedia of the Occult, John Michael Greer tells us that Water is negative, cool and moist – its nature is union, whereas Fire is positive, hot and dry – its nature is energy. Fire and Water are considered weakening, incompatible, and antagonistic, but the steam they produce when brought together is a force to be reckoned with.

In the following poem (written quite some time ago), I tried to express how Water and Fire might actually benefit or complement each other:


CHARIOT OF FIRE
by Zanna Starr

Lion of Light
Lion of Darkness
Fire dancing across the lake of hidden emotion,
Bringing the surface to a boil
Yet deep down, the waters run cool.
Water and fire never mix
Yet fire illuminates water
And water soothes fire.
All becomes clear and calm
In light and darkness.
on Tuesday, June 22, 2010