A Journey through My Tarot Decks: Strength


In this series of posts, I plan to discuss all of the Tarot cards in order, using a different deck for each card. This week's card is Strength (Trump 8) from The Shapeshifter Tarot by D.J. Conway and Sirona Knight, with illustrations by Lisa Hunt. 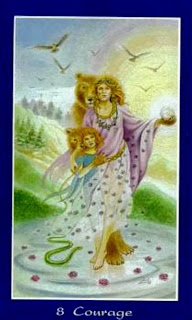 Key Words:
Finding inner strength, courage in the face of adversity
The Strength card is usually one of my favorites in any deck, and The Shapeshifter Tarot is no exception. Titled "Courage," Trump 8 depicts a part-bear, part-human woman. She has one arm around her daughter, also half-shifted.

I especially like the shapeshifter image on this card because it clearly conveys the message that the balance shown on many cards by a woman taming a wild beast is an internal balance – in other words, both the woman and beast are part of our one Self.

Among the symbols on this card are the following (from Conway/Knight):
The woman wears a lavender cloak. I came across an interesting evaluation of the color lavender on line: "A more grown-up and cooler version of the pink of baby girls and the lighter side of purple, the color lavender is associated with genteel ladies and can evoke feelings of nostalgia or romance for women." (Source: http://desktoppub.about.com/od/choosingcolors/f/womencolors.htm). In my tarot system, pink commonly represents emotions, harmony, and sensuality. Purple can indicate power, royalty, and imagination.

The little girl wears blue, the color of spirituality, the unconscious, tranquility, truth, and thoughtfulness.

Hunt's decision to use a bear on this card is at least in part based on the way a mother bear will ferociously defend her young when they are in danger. In The Dictionary of Symbols, Jack Tresidder notes that bears typically symbolize brutal primitive force but that the she-bear also appears as a symbol of "maternal strength, care and warmth."

The Courage card is also about learning when to be gentle, when to stand your ground, and when to take fierce action for protection. It conveys the value of "gentle, controlled resistance to opposition" and suggests that "filling yourself with spiritual power can help you overcome material pressures, oppositions and attacks." (Conway/Knight)

About the deck: Chapter 1 of the book that accompanies this deck explains the underlying foundation of the deck: "Most people think of shamans and shapeshifting only as part of the cultures of North America, Africa, Siberia, and Alaska. What they do not realize is that, in the distant past, Western European cultures also practiced this spiritual art. Shapeshifting was well known there, especially among the Celtic cultures." The authors go on to acknowledge that some people "have no desire to put the time and energy required into learning shamanism but would like to understand and use the energies of Otherworld Animal Allies. This tarot deck will aid them on their path to self-understanding."
on Tuesday, June 29, 2010