Clinton and Trump: A Tarot Perspective

As most of you probably know, the presidential election in America is, well, interesting in many ways. I thought about using the Tarot or Lenormand cards to predict the winner, but decided instead to ask several of my decks their opinion of the two major party candidates, Hillary Clinton and Donald Trump, along with the chance each candidate has of winning (Fire, Air = strong chance; Earth, Water = poor chance). 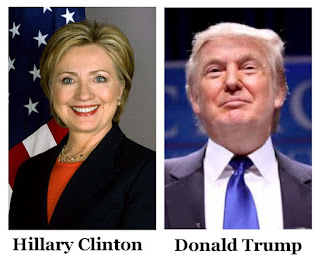 Before I continue, I must warn you that I am going to pursue this in a spirit of fun, and I fully expect the cards to enjoy playing along. My guests are:

Tarot of the Gnomes 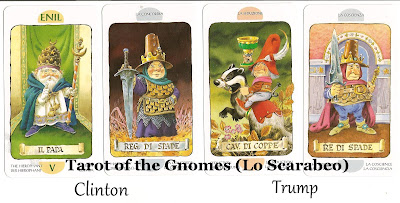 Opinion of Trump: Cavaliere di Coppe (Knight of Cups / Water)
For the gnomes, Trump is a seducer, presenting himself as courageous and courteous to win and keep supporters.
Chance of winning: Re di Spade (King of Swords/Air)
The gnomes also see Trump’s chances of winning as being strong.

Tarot of the Cat People

Opinion of Clinton: Knight of Swords (Air)
Bravery. Skill. Capacity. Opposition and war. Impetuous rush into the unknown.
Chance of winning: 4 of Pentacles/Earth (not strong, but she can improve those chances by overcoming selfishness, envy, or bad debts)

Opinion of Trump: 8 of Wands (Fire)
Sudden progress or movement. Hastily made decisions. Too rapid advancement.
Chance of winning: 9 of Wands/Fire (strong)

Tarot of the Animal Lords 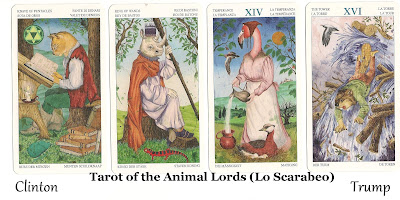 Opinion of Clinton: 6 of Coins (Earth) – “The Benefactor”
Generosity, generosity with strings attached; lack or excess of generosity
Chance of winning: Ace of Swords/Air (strong)

Opinion of Trump: Queen of Swords (Air)
Intellectual and witty; mean and spiteful, a shrewd gossip
Chance of winning: The Fool/Air (strong)

Although the polls currently show Clinton gaining ground against Trump, the cards in general seem to feel both have a strong chance of winning. Tarot of the Cat People had reservations about Clinton, but offered suggestions on how she could improve her chances.


Perhaps not surprisingly, the cards linked Trump with four Trump cards to Clinton’s one. Clinton has two Aces up her sleeve, which is interesting given that if she wins, she will be the FIRST female President of the United States.

Clinton is represented by a total of four Earth cards (counting The Hierophant, associated with the Earth sign Taurus), whereas Trump has no Earth cards representing him. Could this have something to do with stability or dependability?

Beyond that, I will let you make your own explorations and form your own conclusions.


* Note: Unlike the other four decks I used, in the Shapeshifter Tarot, Wands are linked with Air and Swords with Fire.