Sherlock Holmes Card of the Day: 8 of Evidence

The Sherlock Holmes Card of the Day is:
EIGHT OF EVIDENCE
(8 of Wands) 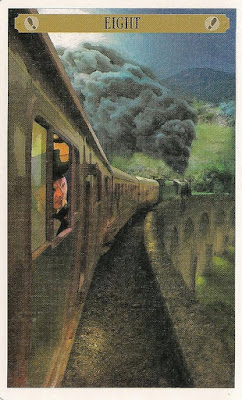 The image on the 8 of Evidence shows a train steaming towards its destination with Sherlock Holmes aboard. As the deck creators tell us: “Holmes and Watson lived in a time when the rail network spanning Britain was second to none. . . The underlying meaning of this card has to do with swiftness, expediency and communication.”

In the Sherlock Holmes movies, I always love the scenes aboard the train, with Holmes and/or Watson sitting in their private car as they rumble along the tracks to the sound of the piercing train whistle.

The book that accompanies this deck also provides interpretations for each card under the headings “The Game” and “The Fog.” The former elaborates on the upright keys, while the latter expands on reversed meanings. An example from “The Game” for the 8 of Evidence: “The freedom to move forward without hindrance. Things moving fast – sometimes too fast. . . The swiftest means of communication.” Examples from “The Fog”: “Delays hamper you. . . Lack of control makes quarrels flare. . . Stagnation follows, upon dealing with too many issues at once.”