Listen to the Animals: Pelican


Our animal for today is the WHITE PELICAN (22)
Ease, Optimism, Grace, Cooperation 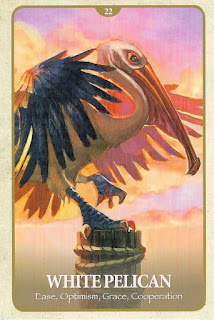 The deck’s creator, Chip Richards, tells us that in alchemy, Pelican symbolized the Philosopher’s Stone (a stone that turned base elements into gold). The pelican (Henet in Egyptian) was associated in Ancient Egypt with death and the afterlife. In medieval Europe, the pelican was thought to be particularly attentive to her young, to the point of providing her own blood by wounding her own breast when no other food was available.

Like many birds, pelicans glide in formation with each other to create draft and lift. They nest colonially, typically in groups of tens or hundreds. Cooperation is key.

Pelicans dive into the water for food, but literally cannot sink, thanks to air sacs beneath their skin. When we imagine ourselves sailing on air currents and floating on churning waves, while also feeling at home on the ground (where white pelicans nest), we begin to understand the ideas of  “ease” and “grace” as traits of the pelican.

The great white pelican is the national bird of Romania. The US state of Louisiana is known colloquially as the Pelican State; the bird appears on the state flag and state seal.

Richards concludes his “Message” for this card as follows: “From the outside, your life appears like a symphony of movement that defies nature. But within your soaring ways, it is the most natural, effortless and joyful expression of who you came to be.”

Here are some photos I have taken of pelicans. 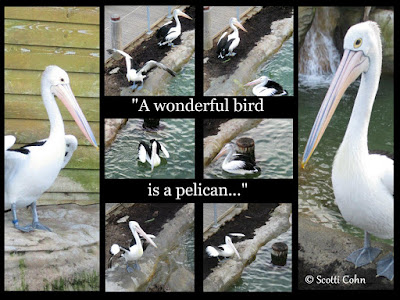