Many of us are fascinated by the idea of past lives and past life relationships. I am doing this reading for a friend who is in a new relationship, and wondering what connections (if any) she and her partner might have from a past life.

The spread is from Sasha Graham’s 365 Tarot Spreads (Llewellyn), so I thought it would be fitting to use the Llewellyn Tarot by Anna-Marie Ferguson (Llewellyn Publications). 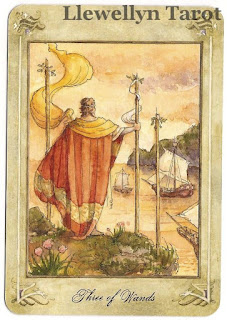 I get the impression that she was an entrepreneur, a person who was not afraid to launch new enterprises, investigate new directions, and explore adventure. Perhaps she was a merchant involved in trade across the oceans. In her book Tarot Life Planner (Hamlyn), Lady Lorelei associates each card with several careers. For the 3 of Wands she lists “sailor, explorer, prospector.” 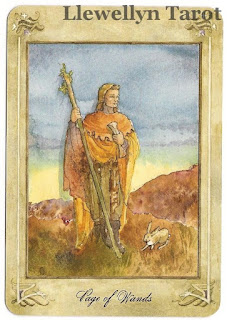 I get the sense that her present partner was, in a past life, a youthful person (perhaps immature or naïve, or maybe just young at heart), someone with a lot of potential and flexibility, open to new ideas and to broadening horizons. Perhaps they worked together in some enterprise, as mentor and apprentice? Lady Lorelei lists the following likely careers for the Page of Wands: “religious counsellor, church worker.” 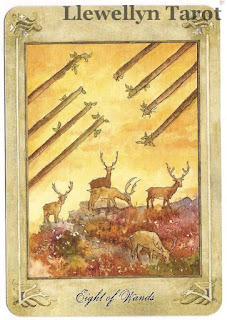 (3) What was their relationship?

Interestingly, the companion guidebook for this Tarot deck states that this card can suggest “falling in love” or a “whirlwind romance.” An opportunity for adventure plays a part, but we might also be looking at the potential for “quarrels amidst partners and friends” or “choosing to let an opportunity or love die.” 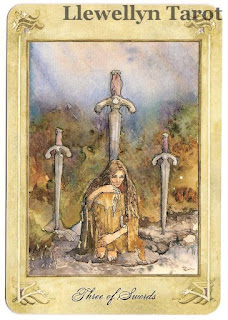 (4) Was it a stable relationship?

This positional definition is phrased as a yes-or-no question, which can be tricky to interpret in Tarot. I tend to avoid doing that in readings, but decided to leave this as is for this reading. My impression here is that it was NOT a stable relationship. The 3 of Swords is typically a card of heartache, hurt, distress, severance, perhaps even unrequited love. Certainly the more negative meanings of the 8 of Wands (above) make sense when paired with the 3 of Swords. I have seen the number Three appear in readings with reference to a love triangle. 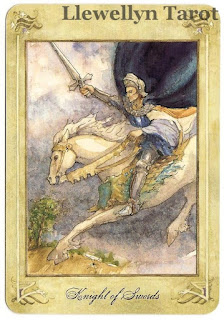 (5) Did they have children?

Again we have a yes-or-no question and must decide what qualities of this card would suggest a “yes” answer and which ones might suggest a “no” answer to the question. One method I have used with some success assigns a “yes” answer to the two active elements (Fire/Air, Wands/Swords). Here we have not only an active suit (Swords) but the Knight, who generally symbolizes activity. 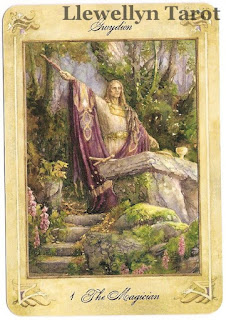 (6) Were they together a long time?

Another yes-or-no question. In general, I view Major Arcana cards as providing a “yes” answer to such questions. Not only that, but The Magician is linked to the active element Air in many systems. I think perhaps they were together a long time (whatever that means), plus I feel that The Magician (as a Major Arcana card) reinforces the idea of a soulmate and/or past-life connection between them. 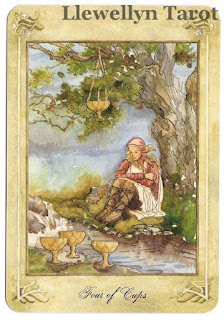 (7) What lesson did they learn together in their past life?

In their past life they seem to have learned what it is like to feel discontent, isolation, doubt, and loss. And perhaps they also learned that it is possible to focus entirely on what one does NOT have, thereby failing to see or appreciate what one DOES have. 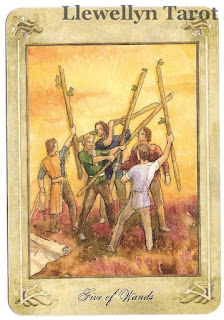 (8) What lesson are they learning in this life?

Back to the suit of Wands we go with a card that typically represents confusion, erratic energy, stress, clash of ideas and principles. They seem to be learning how to deal with this type of conflict and inconsistencies in their lives, possibly within themselves and from people around them. They need to learn how to resolve these conflicts and channel conflicting energies toward a common goal. 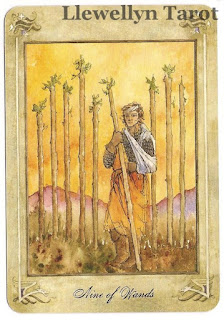 (9) Are they evolving and moving forward?

This yes-or-no question is answered by a Wands card, which suggests a “yes” answer (see my explanation above). The 9 of Wands seems to me to indicate the importance of guarding one’s assets and preparing to defend one’s position or place. In order to evolve and move forward, they will need to anticipate possible hostility towards their relationship, outwit adversaries, and use the experience to grow and refine their own characters.