I can’t be the only one who thinks the Sacred Sites Tarot by Massimiliano Filadoro Federico Penco (published by Lo Scarabeo) is the perfect deck to use to answer questions that begin with “Where...” (To read my review of this deck, click HERE.)

I am using an inverted pyramid layout, and I now give you fair warning: I got a bit silly toward the end while creating “where” questions. I hope I don’t offend anyone. That is certainly not my intention. 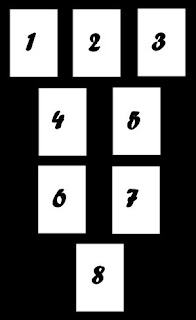 The first three cards are quite serious in nature. 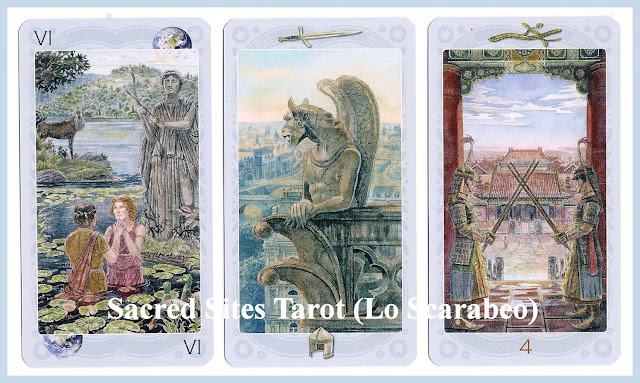 (1) Where does true love live? THE LOVERS
This is way too appropriate. True love lives in The Sacred Forest of Nemi, a site sacred to Diana, where the wise King Numa and the Nymph Egeria consummated their love. True love also lives in mutual trust, attraction, and harmony. It lives in the choices we make and our reasons for making them.

(2) Where can I go when I am afraid? KNAVE OF SWORDS
I can go to Notre Dame de Paris, a cathedral erected in the heart of Paris, constructed over an existing basilica, built in turn on the foundation of a Gaelic-Roman temple dedicated to Jupiter. As a Sagittarius, my sun sign ruler is the planet Jupiter, and therefore this site can reinforce my courage and self-reliance and help me confront and vanquish my fears.

(3) Where can I go to refresh my spirit? FOUR OF WANDS
I can refresh my spirit in The Forbidden City, Beijing, China. This is the Imperial Palace of the Ming and Qing Dynasties, a place forbidden to all who were not members of the Imperial house. This site was a home, a place of refuge, protection, and family. Here I can find a sense of belonging, stability, and harmony.

The next five cards are just for fun. You may not think a deck called “Sacred Sites” would have a sense of humor, but you would be wrong. 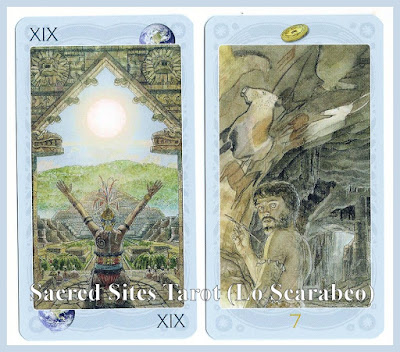 (4) Where in the world is Carmen Sandiego? THE SUN
This question is, of course, from the educational computer games and other media featuring a villain named Carmen Sandiego. Players pretend to be detectives who must locate her. They may have a bit of trouble in this case because Carmen has gone to The Sun… Actually, in the Sacred Sites Tarot, she has gone to Teotihuacan in Mexico (appropriate for someone with the last name Sandiego?) Its name means “the place where men become gods.” I should think Carmen would like that rather a lot.

(5) Where oh where has my little dog gone? SEVEN OF PENTACLES
My little dog has gone to the Lascaux Cave in France. Sacred to the ancient Shamans, its underground passages were used about 17,000 years ago for initiation rites of passage and rituals. No doubt my dog went there to see if his species is included in the Paleolithic paintings of animals that decorate the walls. 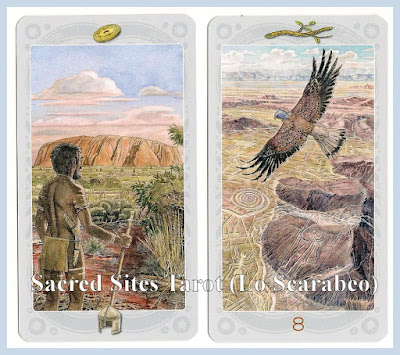 (6) Where does the Sidewalk End? KNAVE OF PENTACLES
Shel Silverstein’s book of poetry Where the Sidewalk Ends is a beloved classic for children everywhere. The Sacred Sites Tarot tells me that the sidewalk ends at Ayres Rock in Australia. Sacred to the Aborigines, it represents for them the Age of Dreams, when the world took shape and the myth of creation. It would seems that the Sidewalk ends where it began.

(7) Where are the Wild Things? EIGHT OF WANDS
Maurice Sendak’s book Where the Wild Things Are is another children’s book classic. The Eight of Wands in the Sacred Sites Tarot takes us to Peru, to the Nazca Lines – large drawings on the earth’s surface that can be visualized only from the air. How and why they were created remains a mystery. Wild indeed! 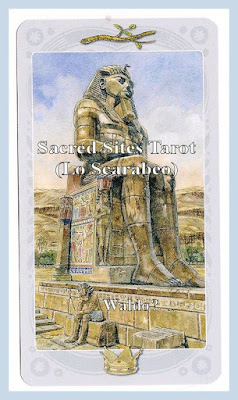 (8) Where’s Waldo? KING OF WANDS
And finally, we join the search for “Waldo.” Released in 1987, Where’s Wally? is a series of children's books created by the English illustrator Martin Handford. (In the U.S. and Canada, the book is titled Where’s Waldo?) Readers are challenged to find a character named Wally (Waldo) hidden in the pictures. Little do they know that Waldo can be found in the Valley of the Kings at Luxor, near ancient Thebes (today known as Luxor). This was the chosen site of burial for the sovereigns of ancient Egypt. Look! I think I see Waldo just there!
on Sunday, December 06, 2015