Sherlock Holmes Card of the Day: 9 of Evidence

The Sherlock Holmes Card of the Day is:
NINE OF EVIDENCE
(9 of Wands) 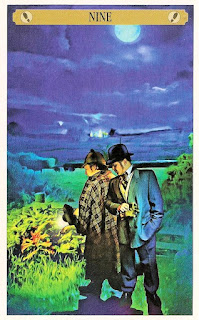 The Holmesian Wisdom for this card is a quote from A Study in Scarlet: “…where there is no imagination there is no horror.”

The book that accompanies this deck also provides interpretations for each card under the headings “The Game” and “The Fog.” The former elaborates on the upright keys, while the latter expands on reversed meanings. Examples from “The Game” for the Nine of Evidence: “A dogged opposition when in unfamiliar terrain… Protecting others against attack… Recognizing the enemy or saboteur within.”

Examples from “The Fog”: “Expressing nothing but hostility in a situation… Looking for subtle ways to overcome a strong opponent rather than wasting your energies… Laying down the fight and allowing others to proceed.”