To set the stage for this seasonal spread, I am quoting from The New Encyclopedia of the Occult by John Michael Greer (Llewellyn Worldwide):

The positional definitions for this spread are inspired by the hauntingly beautiful song “All Soul’s Night” with words and music by Loreena McKennitt. You can listen to the song _HERE_.  You can read the lyrics of the song at _this link_.

Fittingly, I think, I am using the Ghosts and Spirits Tarot by Lisa Hunt (U.S. Games Systems, Inc.) for this reading. The layout is in the shape of a pentacle. 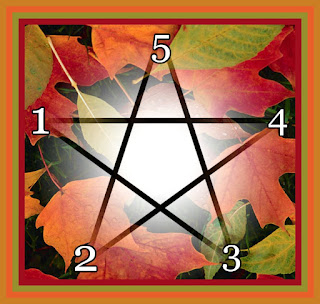 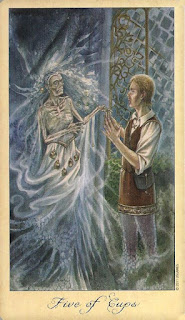 (1) This Spirit dances around and around

A handsome knight named Guntram dances around and around with his bride, the corpse of a castle owner’s daughter who seduced him when he took shelter in the castle [_The Legend of Falkenburg_]. The daughter slipped a ring on Guntram’s finger before revealing herself as a corpse. Even though Guntram hastened back home to marry his true love, the beautiful Liba, that marriage could not be. The ghost-bride materialized at the wedding, and Guntram embraced Liba as he lay dying. Their dance is a sad one for Guntram, as he can only seem to focus on what he has lost. I must confess, I might do the same if I were in his shoes. Fortunately, I am not in his shoes, and I choose not to focus on what I have lost. 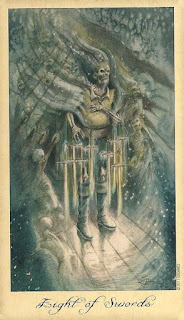 (2) This Spirit brings a hidden memory

_The Flying Dutchman_ sails into my mind, bringing a memory of a time when I felt a loss of control in a difficult situation, primarily due to my own stubbornness and refusal to see a way out. He invites me to hop aboard his ship, to live in that memory forever. I must decline. 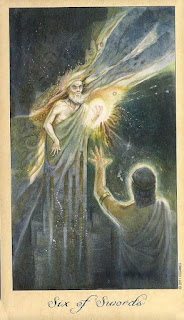 (3) This Spirit carries a light in the distance

The Babylonian demi-god hero Gilgamesh holds a light in the distance, as if beckoning me to follow him along the path he travels. He reaches out to his friend Enkidu after summoning his ghost from the grave to ask him about death. I need to think and reflect on my journey thus far, and consider where I want to go before moving forward. 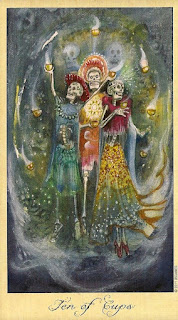 (4) This Spirit waits for me on the bridge

Perfect. The ghosts of people from around the world gather on the bridge to receive honor from their descendants. The living and the dead join together through merriment, feasts, dances, rituals and parties. It is indeed the Day of the Dead (Día de Muertos), and those who have passed over wait on the bridge for me to celebrate with them, to remember them, and to experience their presence while the veil is thin between worlds. 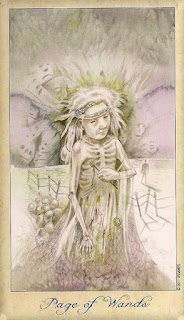 (5) This Spirit passes by the bridge and me

The ghost of a girl known as Acheri descends from the mountains, passing by the bridge and me on her way into the valley. I watch her pass, knowing that she brings disease and devastation. In Native American folklore, it is said that she flies through the valleys at night spreading a shadow of illness over sleeping children. She respects all who wear the color red, and children are given necklets of this color to protect them. My challenge is to try to understand the message this Spirit has for me this Samhain season. What is the story she wants me to hear? How can her message benefit me or help me assist others?