Once again, Helen and I are comparing readings using oracle cards and Tarot cards. This time, our Yes/No reading is based on a novel I am currently reading: Die Smiling (Book 3 of the Claire Morgan series) by Linda Ladd.

Having reached a certain point in the novel, I decided to ask the cards: Did Brianna kill Hilde?

In addition to that question, I gave Helen the following background information: Brianna and Hilde are adult sisters. Brianna told her boyfriend (a detective) that she had not been able to reach Hilde for a day or two and was worried about her. The detective and his partner (a woman) went to check on Hilde and found her murdered in the bathtub with her face disfigured. In the book, as readers, we are beginning to get the sense that Brianna and Hilde did not like each other (even hated each other). 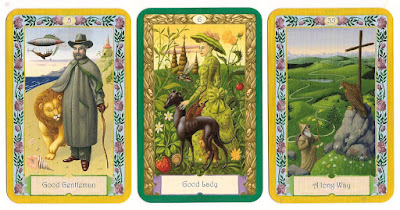 I love the fact that in every one of the Yes-No readings I have done, the cards have never once given me all three “Yes” or all three “No.” It’s always a combination. In this case, it looks like the cards are saying it is very unlikely (but not impossible) that Brianna killed Hilde (2 No, 1 Yes).

Having read most of the book before drawing these cards, I interpret the Good Gentleman as Brianna’s detective boyfriend. It is interesting that the Little White Book (LWB) for the Mystical Kipper states: “He has a lot of power and strength” but “He only becomes a fighting lion in order to help you if others attack you.” This is exactly what happens in the book, very near the end, when Brianna and the detective’s partner are attacked.

The Good Lady, I think, could refer to the detective’s partner. There aren’t any other females in the story that have such positive, caring qualities. Finally, “A Long Way” could easily refer to the difficult, at times horrifying road that Brianna and her sister traveled from childhood to the present day. 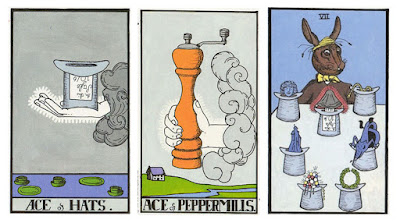 Helen writes: “Firstly using the system I use with 2 Aces the cards are saying she probably did, but there is an element of doubt here shown in the 7 of Hats.  When I look at both the Aces it tells me that her emotions towards her sister are overflowing, and this is what drives her into thinking that she can run with an idea. These two cards together show me a burning desire to act against her sister.

However, along with these two cards is the 7 of Hats (Cups) and what this tells me is that she is weighing up what she can achieve and what is just an idea that she cannot possibly carry out.  I think what  the cards are actually saying is that Brianna has the desire to kill her sister but the choice of how to go about it may just be a stumbling block for her - this is the element of doubt that the cards are presenting.

All in all if I had to answer yes or no then strictly going by my system of Aces, I would have to say  it’s likely she did.”

As it turns out, Brianna and her sister did hate each other while growing up, but only because of the way their their psycho-mother treated them both – she idolized Hilde and tormented Brianna. Hilde took advantage of this and told lies about Brianna. Psycho-mom responded by abusing Brianna even more. Then, a psycho-boy who lived nearby became friends with Brianna and helped her devise ways to torment Hilde. Eventually, Hilde and Brianna became rivals for the affection of the psycho-boy, and he betrayed Brianna with Hilde.

We do see that Hilde and Brianna both carried a lot of hate for each other growing up, to the point where they each wanted to kill the other at different times. Eventually, though, they both realized that psycho-boy was a much worse threat to them both. When they got older, they tried to get away from him, but he found Hilde and killed her because she wouldn’t tell him where Brianna was. Then he found Brianna anyway and came after her, whereupon the Good Gentleman and Good Lady intervened.

So it is certainly fair to say that Brianna was “involved” in Hilde’s death, both because of her behavior in childhood (when she would have happily killed her sister) and because Hilde died trying to keep Brianna’s location hidden from psycho-boy.

Sorry to have spoiled the ending of Die Smiling! But if you like psychological thrillers, there are lots of other books in the same series that might interest you: http://www.kensingtonbooks.com/author.aspx/25421