Sherlock Holmes Card of the Day: Page of Evidence (Wands)

The Sherlock Holmes Card of the Day is:
BAKER STREET IRREGULAR
Page of Evidence (Wands) 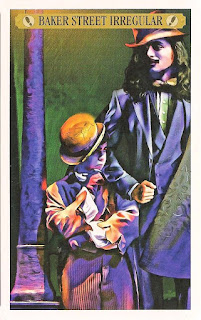 The Holmesian Wisdom for this card is a quote from The Sign of Four: “Dirty looking rascals but I suppose every one has some little immortal spark.” The actual quotation continues with “concealed about him.”

The Baker Street Irregulars were a group of ragged children who were ready to take any risk for their hero, Sherlock Holmes. He paid them a shilling a day to ferret out information, with a bonus to anyone who found something highly significant. On the Page of Evidence we see Wiggins, the leader of the Irregulars, about to pick the pocket of a villainous-looking man.

The book that accompanies this deck also provides interpretations for each card under the headings “The Game” and “The Fog.” The former elaborates on the upright keys, while the latter expands on reversed meanings. Examples from “The Game” for the Page of Evidence: “an adventurous person who acts as an emissary or ambassador. . . a catalyst for change and improvement. . . devotion to a particular interest.”

Examples from “The Fog”: “someone easily influenced. Occasionally over-zealous or bored, he likes to grab attention. . . Strange or unsettling news.”
on Sunday, October 11, 2015