Sherlock Holmes Card of the Day: 6 of Observation (Swords)

The Sherlock Holmes Card of the Day is:
SIX OF OBSERVATION
6 of Swords 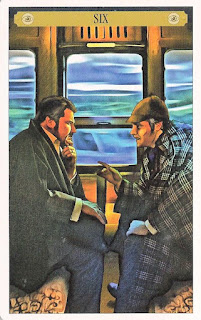 In spite of that quote, the Six of Observation depicts Holmes and Watson deep in conversation on a train. The creators of this deck note that “The Six of Swords has long been seen as a card of relationships, and especially the things we learn from sharing.” I have not thought of the Six of Swords that way, really, but I think I see what is meant. On the traditional Rider-Waite card, a woman and a young child are being rowed across a body of water towards a land that lies not far ahead. Their voyage is aided by the man who propels the boat. The woman and child have a relationship with each other, and it could be said that the man rowing the boat has a relationship with both of them, as he is helping them travel.

The Holmesian Wisdom for this card is a quote from Silver Blaze: “Nothing clears up a case so much as stating it to another person.”

Keys for this card, upright, are: “success after trouble, safety and protection, a journey, new perspectives, clearance of difficulties and blockages as a result of perceptive thought.” Reversed, the card can suggest “disclosure, revelation, unwanted surprise, change of plans or direction.”

Examples from “The Game” for the Six of Observation: “A journey or fresh insights and clues. . . escaping from the present circumstances. . . New approaches to old problems.”  Examples from “The Fog”: “An unwillingness to leave the past life behind. Taking your troubles along with you. . . Maintaining a partnership that is over.”
on Monday, October 26, 2015