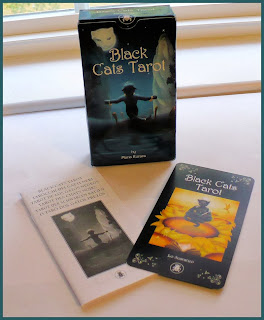 As a lover of black cats in general and my cat Karma in particular, I eagerly looked forward to having an entire Tarot deck featuring black cats. I have collected many cat-themed decks over the years, and I enjoy seeing the distinctive styles of different artists as they render my feline friends in the context of Tarot.

One thing that I am not fond of in this deck is the way many of the cards depict black cats against a very dark background. I understand that the cats need to be black, and that a deck called "Black Cats Tarot" should have a mysterious look to it (which calls for dark colors). However, many of the cards are so dark that my eyes struggle to see the details. I don't know if this is due to the original art or the printing process -- or even if it varies from copy to copy of the deck. Examples include Strength, Death, The Devil, The Tower, the 8 of Cups, 5 of Pentacles, 2 of Wands, and 8 of Swords. On the 5 of Pentacles, I actually have to hold the card up to the light and put my nose up to the picture to see what is there. 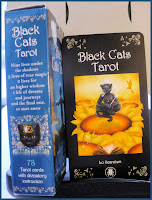 The good news is that on most of the cards, the art can be seen clearly and the details explored. The artist adds some nice touches to individual cards. For example, the Queen of Swords is depicted in an autumn setting, a reference to the common association of the element Air (Swords) with the season of autumn. However, this elemental association is not reflected in the other Swords Court Cards.

I like the whimsical style of this deck and I look forward to doing some trial readings with it.

"This Rider-Waite-based tarot celebrates and honors the beautiful and magical black cats. Cleverly incorporating feline characteristics and legend into traditional tarot archetypes, this fanciful deck captures these creatures moving between worlds of reality and fantasy, the mundane and mystical. Disarmingly cute yet unmistakably wise, the black cats encourage you to explore your own animal nature." 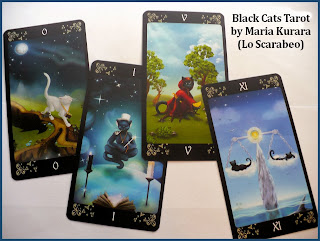 From the Little White Book (LWB): "The nature of the cat. . . belongs to two worlds: the real world and a fantasy world depicted in this Tarot, but above all a material world and a spiritual one."

According to the publisher, The Black Cats Tarot "is based on" the Rider-Waite-Smith tradition -- yet the cards are not what I would call "clones" of that model in any strict sense. For example, the 3 of Swords depicts not a heart pierced by swords but two cats sitting in the rain with their backs to each other, a sword stuck in the ground next to each cat, and a third sword lying nearby. The 4 of Swords does not picture a knight's tomb but a cat sitting on a bench with its leg bandaged.

Some of the cards bear little if any resemblance to the RWS model. For example, On the 10 of Wands, instead of a figure carrying a bundle of wands we have a cat in a cave holding one cat-headed wand while looking at 8 others. A 9th wand leans against a wall in the background. The LWB description gives the keyword "Accomplishment" and the description, "When we are about the [sic] attain what we have always desired, we are often overwhelmed by fear. This is the dark side of desire. Will we cross the threshold or remain outside?" 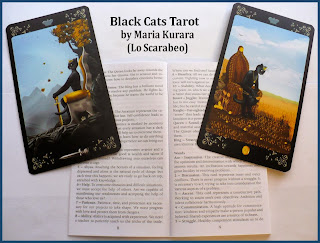 The LWB that comes with this deck offers the usual Lo Scarabeo divinatory meanings in English, Italian, Spanish, French, German, and Portuguese. No reversed meanings are given. For the Majors, the number and title of the card is followed by a few lines of interpretation. The pips have a keyword followed by two or three lines. Each Court Card is given a "role" or "trait" with its interpretation. For example, the Knave of Pentacles is "Juggler," the Knight is "Far-sightedness," the Queen is "Sound administration," and the King is "Strategy." A 6-card spread called "The cat's tail" is also provided in the LWB.

Interestingly, two of the cats in this deck are white. For The Fool, the LWB tells us "The White Cat represents freedom and purity. . ." On The World, a white cat appears to step out of a black "shell", symbolizing a new cycle and being "purged of our own psychic baggage." 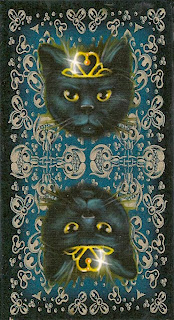 Card backs are reversible and feature the head of a golden-eyed black cat wearing a gold tiara. Design elements on the backs are repeated at the top and bottom of the card faces.

Maria Kuara's cats have humanoid bodies with cat heads. Because of that, they have a somewhat "cartoon" feeling. They are, for the most part, not clothed. It is sometimes possible to tell from the pose or posture that a cat is intended to be male or female, but there are no obvious sexual distinctions. 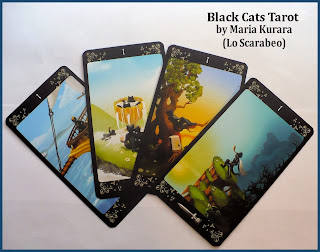 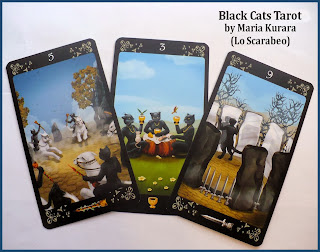 In accordance with the FTC Guidelines for blogging and endorsements, I hereby disclose that this product was provided by the publisher for free. Other than the occasional review copy, I receive no monetary or in-kind compensation for my reviews.  The substance of my reviews is not influenced by whether I do or do not receive a review copy.
on Wednesday, October 16, 2013