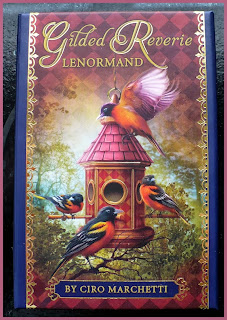 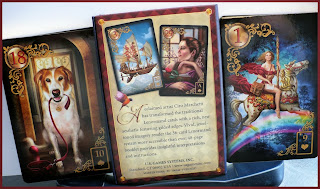 Taking into account my increased interest in the Lenormand system and my love for Ciro Marchetti's art (I own his Gilded Tarot and Legacy of the Divine Tarot - Llewellyn Publications), I was pretty sure I would find a lot to like about Marchetti's Gilded Reverie Lenormand. I was right.

Whenever I attempt to describe Ciro Marchetti's art, I immediately choose such adjectives as "exquisite," "dazzling," and "entrancing." I won't be changing my adjective choices for this deck. To add to my enjoyment, the quality of the box and cards is exceptional.

This is a treasure/jewel of a deck, and I am excited about reading with it. So stay tuned!

"Acclaimed artist Ciro Marchetti has transformed the traditional Lenormand cards with a rich, new aesthetic featuring gilded edges and accents. Gilded Reverie Lenormand remains true to the iconic 36-card oracle system made famous in the 19th century by Mlle Lenormand, the fortune-teller to Napoleon and Josephine Bonaparte. Recently, there has been a groundswell of renewed interest in reading with Lenormand decks. Gilded Reverie’s elaborately detailed images in vivid, jewel-toned colors render the 36-card Lenormand system more appealing and accessible than ever. A 48-page booklet provides insightful interpretations and instructions. " 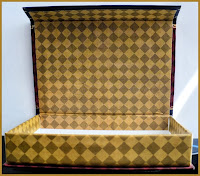 Ciro Marchetti is an award-winning artist who has designed five tarot and oracle decks including Tarot of Dreams and Oracle of Visions. Prints, puzzles and other items featuring his artwork are popular around the world. Originally, he self-published the Gilded Reverie Lenormand in limited quantity as a collector's edition. The set included lots of extra "goodies" and consisted of 40 cards. Each set was unique with different versions of the cards made.

The U.S. Games Systems mass market version is a 36-card standard Lenormand deck. Ciro originally decided to not include the extra cards in the USGS edition, but after hearing so many people say they want them, USGS decided to publish them as a separate mini 8-card pack. 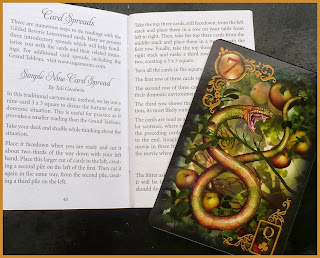 In the Little White Book (LWB), card meanings are provided by Rana George, with additional descriptions by Tali Goodwin. Ciro writes, "In the Reverie, we explain each card in its most generic manner, allowing some play of meaning for you as a reader, based on experience of a number of traditions and actual practice." He tells us that in some cases, he edited the text to "better reflect a personal take on the image."

The LWB features not only 2-4 paragraphs of interpretation and discussion for each card, but a special (sometimes rhyming) paragraph written in first person, as if the card itself is talking. For example: "Birds (12) - A phone call, a text, or a date; that is how I communicate. I am in meetings, or interviews, and I like to negotiate. I can be your sibling, lover, or mate. Couples is what I indicate." The LWB brings the Lenormand into the 20th Century by adding, "This too is the ever-growing world of Facebook, and Twitter communication. The card may mean literal 'Tweeting.'"

The LWB also includes three introductory Card Spreads: a Simple Nine-Card Spread, The Fortune-Telling Day Spread (both by Goodwin), and The Chocolate Bar Spread by Rana George. Sample Readings are provided for all three spreads. 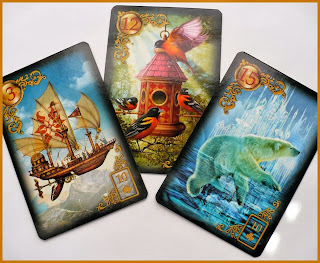 The box for the USGS edition of this deck measures 3.125” x 4.125”. It is a compact, very sturdy, high-quality hinged box that folds over and closes with a magnetic strip. The front features the image from Card 12. Lettering, borders, and various details on the box are etched in gold foil.

The cards measure: 2.75” x 4.125”. The images are printed on glossy stock with feathered edges that melt softly into black borders. Card numbers are printed in red and placed in a gold circle framed by gold scrollwork in the upper left corner of each card. In the bottom right corner the corresponding traditional playing card number and suit appears in gold, in a rectangle outlined in gold, accented by an etched gold design. The cards are gilt-edged.

Card backs have a black and red checkerboard pattern with gold scrollwork in each corner. In the center is a solid gold ball (it reminds me of a gazing ball) in which cloudy images seem to be trying to form. The ball is framed by scrollwork "corners". 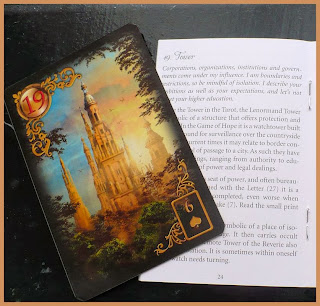 Rich, vibrant colors (along with the glossy stock) make the images pop. Details add meaning without overwhelming the central image.

Ciro adds his own special touches to many of the cards. For example, in traditional Lenormand decks the Rider (1) is a man on horseback, whereas the Gilded Reverie depicts a woman on a merry-go-round horse. The Gilded Reverie Heart (24) incorporates two white swans facing each other, their necks forming a heart that frames a red and gold heart. Instead of a key alone, the Gilded Reverie Key (33) shows an ornate, bejeweled key superimposed across a bird cage containing a red rose. Letter (27) features actual correspondence written (in French of course) by Mlle. Lenormand.

If you're not already familiar with Ciro's art, this deck is a perfect opportunity to experience it.