Journey Through My Decks: 2 of Pentacles

For this entry in my Journey through My Decks series I chose to use the _Psychic Tarot Oracle_ by John Holland (Hay House, Inc.) 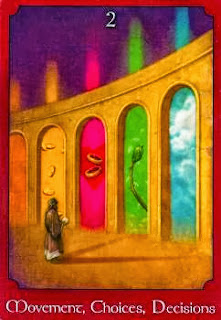 The Psychic Tarot Oracle is not -- strictly speaking -- a "Tarot Deck." It consists of 22 Major Arcana cards (numbered 0 to 21) like a traditional Tarot deck. However, the Minor Arcana consists of 36 cards divided into four categories: physical, emotions, mental, and spirit. These are numbered 1-9. Finally, there are no Court cards. Instead, deck creator John Holland provides 7 Chakra cards.

John Holland writes that The Psychic Tarot Oracle deck "was created with a broad understanding of the teachings of the traditional tarot." From what I've seen so far, this is clear.

The suit of Physical in this deck represents "business, finances, money, prosperity, earthly possessions, material gain or loss, and security." As such, it corresponds nicely with the suit of Pentacles (Coins, Disks) in many decks.

The Two Physical card -- Movement, Choices, Decisions -- is at least compatible with the Two of Pentacles in Book T* -- "Harmonious Change." As Holland puts it, "Significant changes and choices must be made. . . The changes that are emerging aren't some random acts or coincidences -- they're all part of a positive and larger scheme."

The Psychic Tarot card depicts doorways which could be seen to represent the four elements: Earth (coins), Water (a heart and wedding rings), Fire (growth), and Air (sky). The figure standing before the doorways is faced with a choice. At the same time, it seems clear that a balance among these elements is needed. We may choose to emphasize one area of life more than another at any given time, but we cannot afford to completely neglect any area.


* Book T   The Tarot, Comprising Manuscripts N, O, P, Q, R, and an Unlettered Theoricus Adeptus Minor Instruction. A Description of the Cards of the Tarot with their Attributions; Including a Method of Divination by Their Use. A public domain manuscript.
on Thursday, October 24, 2013