Journey through My Decks: 4 of Swords

In this series of posts, I plan to discuss all of the Tarot cards in order, using a different deck for each card. Today I'm exploring the FOUR OF SWORDS from The Baroque Bohemian Cats' Tarot by Karen Mahony and Alex Ukolov (Magic Realist Press). 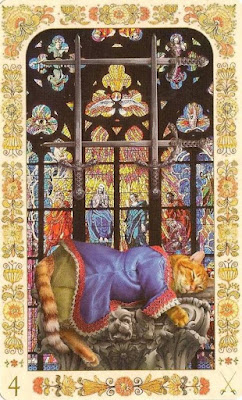 "Like a graceful vase, a cat, even
when motionless, seems to flow."
~ George Will ~

In this deck, the suit of Swords is "about the higher forms of intellect, the mind and mental force. . . and can refer to conflict, struggles, particularly psychological ones, willpower, pain and anger." (Mahony) The suit emphasizes the importance of incisive, intelligent thinking yet also underscores the need for balance between that quality and a practical or compassionate approach.

On the Four of Swords we see a ginger cat sleeping deeply, "completely oblivious of both the magnificence of the setting and, indeed of the sculpture of a happy dog with lolling tongue that's just below him."

In general, cats are more alert during their waking hours than human beings and also better at napping than humans. Karen Mahony notes that "the average domestic cat is believed, incredibly, to sleep seventeen hours a day).

As Mahony points out, Arthur Waite's commentary on this card has dark associations, among them "exile, tomb and coffin." He describes the Four of Swords as "a bad card, but if reversed a qualified success may be expected by wise administration of affairs" (The Pictorial Key to the Tarot by Arthur Edward Waite, WeiserBooks). However, more modern interpretations of the card often center around "a respectful stillness, peace and meditation."

Divinatory Meanings provided by Mahony: "Time out from the fray, rest and recuperation, mental silence and stillness, a pause to retreat and reflect." Reversed, the Four of Swords can suggest: "A return to the world, being awakened and brought back to real life, cautiously emerging from retreat."

The cat on this card is a stray photographed at the Prague Cat Rescue Home. The stained glass window is from the St. Vitus Cathedral at Prague Castle. The stone slab is based on part of a carving on the wall of the Jesuit Clementinum.

--------------------------
About the deck: Following in the footsteps of Louis Wain, the English Victorian cat artist, Karen Mahony and Alex Ukolov created a Tarot deck in which each card features a well-dressed feline or two. The background scenes are from the city of Prague. Their aim was to "produce a tool as well as a piece of art" and to offer "not only one of the most attractive but also one of the most readable cat tarots to date."
on Saturday, March 03, 2012